On the start of the 62 lap feature, Root jumped into the lead, overtaking outside front row starter Austin Fredwall.  The red flag was displayed on lap 6 when Austin Thiel had an axle break, sending him into the backstretch wall and collecting Chris Benson in the process.  Both drivers were ok, but their cars sustained heavy damage.

Fredwall powered his way by Root on the re-start and stayed out front until Root dipped low on Austin on lap 19 to re-take the number 1 spot.  Dennis Strickland and fast qualifier Frank Jiovani (15:100) followed in Root’s tracks to drop Austin back to 4th spot.  Jiovani slid by Strickland on lap 34 to take second and set his sights on the leader, only to have an oil line let go on the next lap, ending his night.  Root stretched his advantage as the laps wound down on his way to the initial win for the #9 driver at Toledo.  Strickland was second, Claude Plante Jr. third, Joe Hawes fourth and Scott Pemberton was fifth.  Jiovani, Fredwall, Nick Bailey, Thiel and Benson were next in line at the finish.

The 25 lap ARCA R & M Recycling Late Model Sportsman feature ran all green flag as Greg Stilwell Jr. scored win number 3 of the year, holding back the strong challenge of Ron Allen.  That duo led the pack and Grant Hedges closed in on the leaders in the last 8 laps.  Allen worked hard to get by Greg lap after lap, splitting lapped cars and making things interesting as Stilwell held on for the win.  Allen, Hedges, Howard Kelley Jr. and Andy Harding completed the top five, followed by Todd Perkins, Dillon Zalenski (in his first race on the ½ mile), Jim Brazeau, Dan Grigsby, Todd Burtscher, Robert Meiring and Mike Young.  Young was in third spot and with the leaders in the early going, but had to pit as his car was dumping fuel, dropping him out of contention.  Allen set quick time at 16:963. 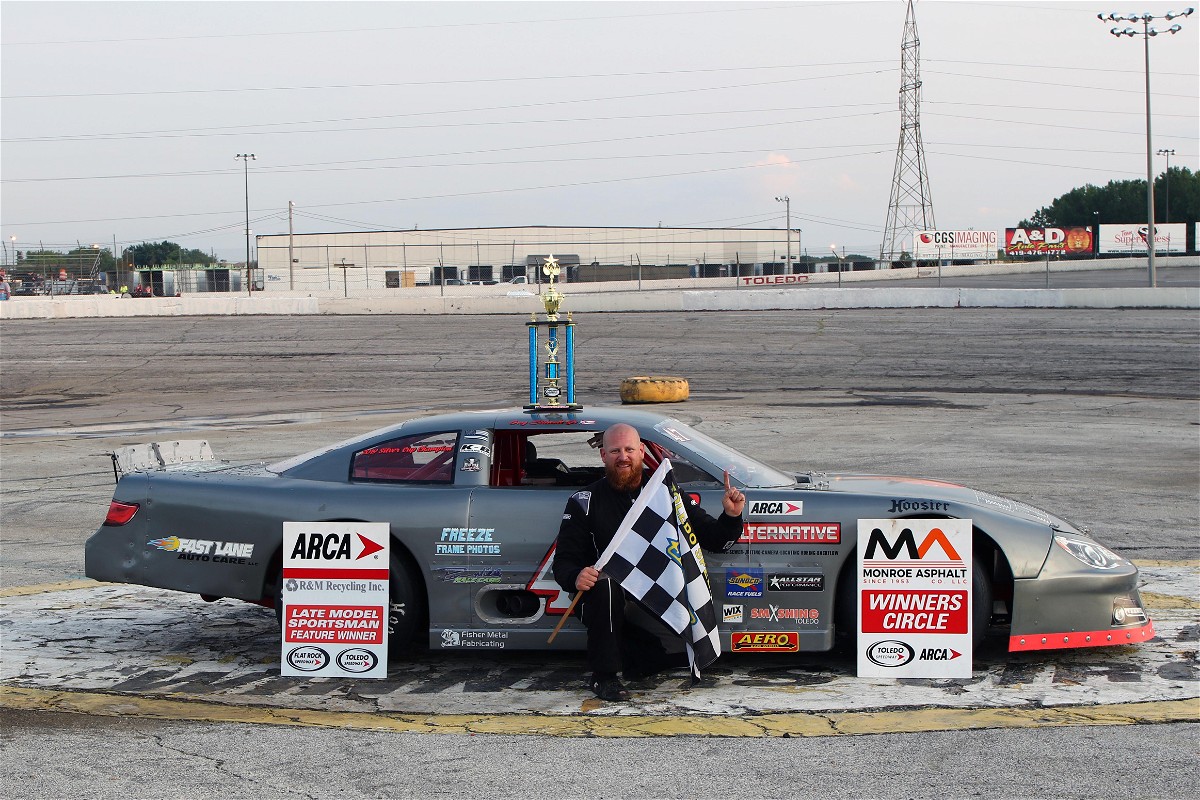 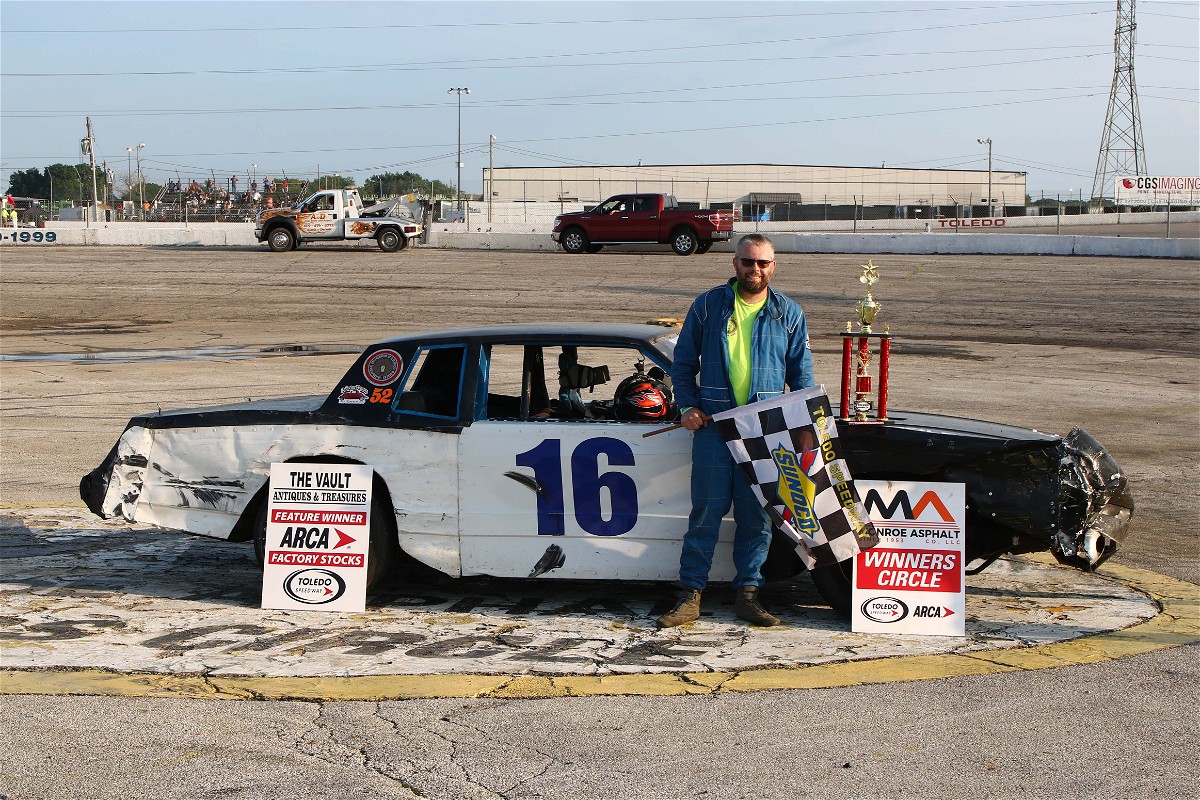 A wet track did not stop Dennis Whisman Jr. as he zoomed to victory in the 20 lap ARCA Figure 8 feature.  The heavy rains from Friday’s storm kept the track from being totally dry as the cars maneuvered the wet surface.  John Lambert, Brice Thomsen, Jakob Lee, Stephanie Bradley, Ethen Lambert, Eugene Worden and Dave Lambert followed the winner across the stripe. 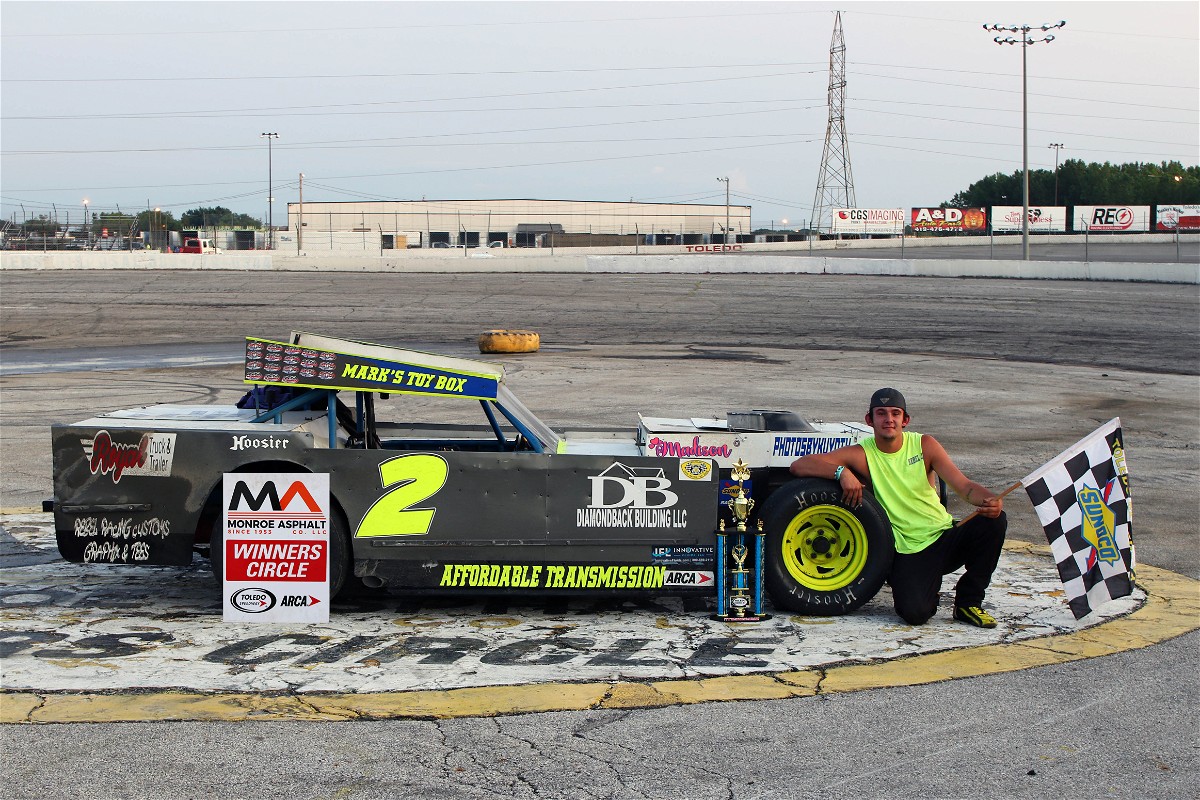 Toledo Speedway’s next race is Friday night, August 13.  The final School Bus Race of the year is set as R & M Recycling will sponsor the evening of fun and entertainment.  The ARCA R & M Recycling Late Model Sportsman, The Vault ARCA Factory Stocks and the ARCA Figure 8’s will be also be in action.  A Boat Figure 8 race and a Flag Pole race are also on the race card.

Tickets are now on sale online at www.toledospeedway.com.  Go to the right margin and click on the Buy Tickets Now button.  Tickets are also available by calling 419-727-1100.  Race time is 7:30 p.m.