For most drivers rocketing up the stock car ladder system, their eventual goal is to reach the Monster Energy NASCAR Cup Series. Their dream is to race and win at Daytona and go on to become a champion to join the likes of Petty, Pearson, Yarborough, Gordon, Waltrip, Allison, Earnhardt and Johnson as legends of the sport. Most of them these days start when they’re young, sometimes as young as four years old, racing in quarter midgets, then go-karts, then perhaps a late model at their local short track before trying to land a ride in the ARCA Menards Series.

The ladder system has been in place for a couple of decades now, and several have taken advantage of it. The late Davey Allison, who was recently inducted into the NASCAR Hall of Fame, spent two full seasons in the ARCA Menards Series after starting his career on the dusty Alabama short tracks. An eight-time ARCA winner, he finished second in the ARCA points in 1984 before moving on to become NASCAR’s Cup Series rookie of the year in 1987. Davey would go on to win the Daytona 500 in 1992 and was part of an incredible six-way battle for the championship that season, eventually finishing third behind Alan Kulwicki and Bill Elliott.

Others have tried to follow Allison’s pathway to NASCAR stardom, including current drivers Justin Allgaier, Michael McDowell, Ty Dillon, and Chris Buescher. Allgaier, Dillon, and Buescher are former ARCA champions, while McDowell finished as high as second. Other current NASCAR drivers have raced in ARCA sporadically on their way up the ladder, but never competed for a championship, including three-time ARCA winner Kyle Busch, who is the 2015 Cup Series champion, and two-time ARCA winner Joey Logano, who won the Cup title in 2018.

Logano, who drives for Team Penske, credits the ARCA Menards Series for launching him into the national spotlight when he won at Rockingham in 2008.

“At the time I was running a lot of K&N Pro Series races and we didn’t get to run a lot of the big tracks,” Logano said. “ARCA was a great place to go to get experience on the bigger tracks. Pocono, when you go there for the first time, it’s so difficult and different. Having that experience there helped me as a driver quite a bit. It gives you the ability to learn. It’s a good learning tool to get you some experience until you get to the next step in Trucks or XFINITY.” 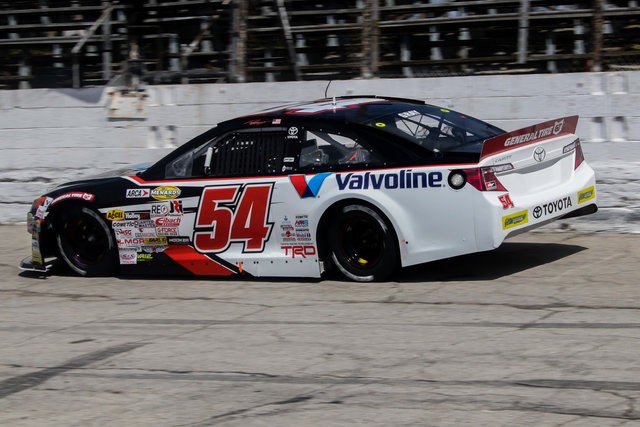 One driver looking to follow in Logano’s footsteps is Tanner Gray (No. 54 Gray’s Motorsports/Valvoline/Durst, Inc. Toyota). Like Logano, he comes to the ARCA Menards Series with some experience in the NASCAR K&N Pro Series. In fact, he won for the first time in his career on May 3 at the four-tenths mile South Boston Speedway in Virginia. And like Logano, who had a championship background as a youth in Legends cars, Gray also has a championship under his belt.

But that’s where the similarities end.

Rather than racing around the tight quarter-mile infield oval at Charlotte Motor Speedway or other similar short tracks up and down the east coast like Logano did, Gray earned his racing championship at 200 miles per hour going in a straight line 1000 feet at a time. And he did it on one of drag racing’s most prestigious stages, the NHRA Mello Yello Drag Racing Series Pro Stock division.

Gray became the youngest national event winner in NHRA history when he won at Las Vegas 13 days before his eighteenth birthday in 2017. He backed that up with eight national event wins in 2018, including wins at Summit Motorsports Park in Norwalk, Ohio and the famed U.S. Nationals at Lucas Oil Raceway in Indianapolis, on his way to becoming NHRA’s youngest-ever champion.

It may seem to be an odd transition to make, but for Gray it’s natural.

“The transition has definitely been tough,” Gray said. “I’ve learned a ton since the start of the year, and I feel like I’m starting to see progress in myself. I think I’m continuing to get more and more comfortable with the DGR-Crosley guys and working with them. They have done an awesome job so far, and I couldn’t ask for a better group to work and learn with."

Gray has already had success in the Buckeye state, winning in Norwalk last year. Norwalk is a little more than an hour’s drive from Toledo, where he will be racing on May 19 in the Sioux Chief PowerPEX 200. Fresh off his first career oval track win, he’s coming to Toledo Speedway with some momentum on his side. Should he win, Gray would join a list of nineteen other drivers who have scored their first ARCA Menards Series win at Toledo, joining the likes of recent first-time winners Chris Buescher, Myatt Snider, and Todd Gilliland, all of whom now race in various national NASCAR series.

“I’m confident going into Toledo,” Gray. “I think it’s going to be a fun race. We’ve struggled a little bit this year on the ARCA side of things, but I feel like if I can do my job right, then we will be up front and have a shot to win. DGR-Crosley always brings fast race cars to the track so it should be good.”