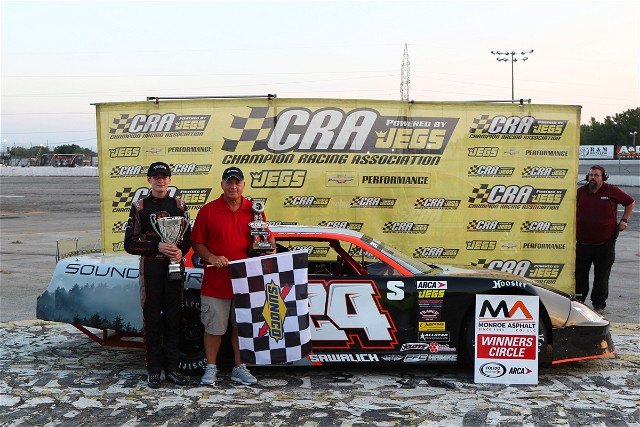 Claude Plante of DTS and representatives from the Courtyard by Marriott and Comfort Suites, joined Oberle in the command to start engines.

The Outlaw-bodied Super Late Models 100 lap main event started the night, with an invert of the top 10 qualifiers.  Hometown favorite Nick Bailey blasted into the lead from the number 1 spot, holding the point for the first 25 laps as the field settled in.  Conner Zbozien snuck under Nick on lap 26 to grab the lead, and the door opened as the next 5 cars followed Conner past Bailey.  For the first half of the race, the top 6 cars ran in formation, with Zbozien, Scott Hantz, Berry, Steve Needles, Cayden Lapcevich and JR Roahrig in that order.

Berry slid under Zboziten on lap 54 on a re-start and set sail in front as the field tried to chase down the leader.  Zbozien ended his night with brake issues on lap 80, going down pit road to end his run.  Berry had a 5-car length lead as Roahrig, now in second spot, tried to reel in Berry but to no avail.  Trevor grabbed the checkered flag in Bob Blount’s #16 machine to score the big win and somewhat of an upset victory.  Roahrig was second at the stripe, Needles third, 2-time Glass City and defending race winner Lapcevich was fourth and Mike Mazzagatti was fifth, with the top 5 on the lead lap.  Bailey was 6th, 1 lap down, Hantz was seventh, 2 laps off the pace. Joe Hawes, Zbozien, Dennis Strickland, Chris Benson, Emerson Huffman, Harold Fair Jr. and Steve Hawes completed the finishing order. 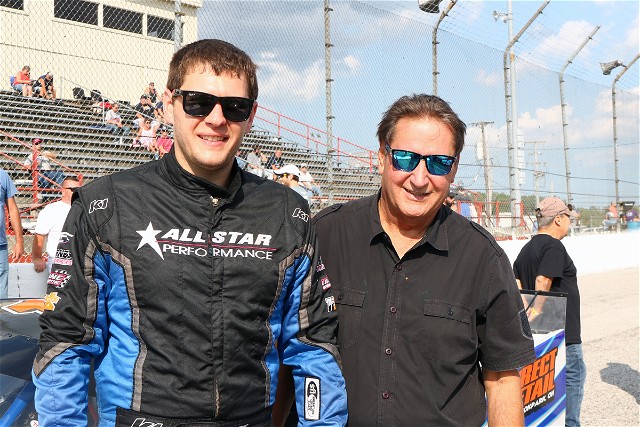 Kyle Crump jumped into the lead on the green flag for the ARCA/CRA Stock-bodied Super Late Model 100 lap feature race.  That was short-lived, however as California native Jesse Love took the top spot on lap 7.  Love built up a comfortable margin as Francis Engineering fast qualifier William Sawalich (15:549) began his move to the front.  NASCAR Truck Series regular Carson Hocevar dropped out on lap 14 with engine failure while running second, while Brian Campbell, who was in third spot, pitted on lap 25 with a broken sway bar, ending his night.

By lap 48, Sawalich, the Eden Prairie, MN youngster, had closed the gap on his teammate Love and was on his bumper.  The top 5 at lap 50 were Love, Sawalich, Mike Simko, Chase Burda and Albert Francis. For the next 35 laps, the top two ran nose to tail and stretched their advantage over third-place Simko.  On lap 83, Sawalich bumped Love in turn 3, edged Jesse up the track and opening the door for the new leader.  Sawalich took off and grabbed the victory over Love, Simko, Burda, Crump, Francis, Billy VanMeter, Eddie VanMeter, Harold Fair Jr., Campbell, Brandon Varney, Hocevar and David Liaeff.  TJ Duke did not start the race.  The top 6 were all on the lead lap. 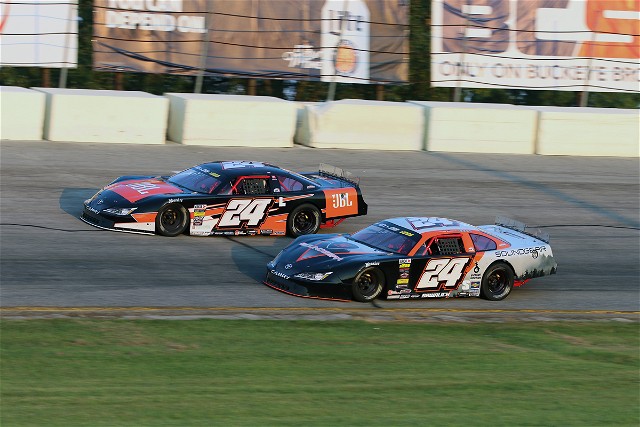 The final race of the season at Toledo Speedway is set for Saturday, October 8 as the track hosts the ARCA Menards Series National Championship event-The Shore Lunch 200 presented by CGS Imaging.  The track’s Salenbien Excavating ARCA Late Model Sportsman and The Vault ARCA Factory Stocks will compete in their Season Championship events.

Practice begins at 10:30 a.m., the Factory Stock Championship race is at 12:30, followed by pole qualifying for the super-speedway style stock cars of the ARCA Menards Series.  The Late Model Sportsman Championship feature is at 2 p.m., followed by an on-track autograph session.  The 200-lap race begins at 4 p.m.