Toledo, OH—October 10, 2021:  A rainy morning turned into a day of sunshine as Toledo Speedway closed out its racing season with the Hemelgarn Racing/Super Fitness Rollie Beale Classic 100 for the USAC Silver Crown Cars.  Kody Swanson took the win and notched his 6th championship in the class.  Jeff Metdepennigen cemented his title by winning the The Vault ARCA Factory Stock feature, and Ron Allen’s second place run gave him his 10th title in the ARCA R & M Recycling Late Model Sportsman class.  Greg Stiwell notched his 4th win of the year by taking the feature event, celebrating by doing a burnout and visiting the Monroe Asphalt Winner’s Circle.

Ron Hemelgarn greeted the crowd prior to the start of the day’s schedule of events.  The family of Rollie Beale was recognized in pre-race ceremonies, as were former racers on hand for the Open Wheel Racers Reunion.  A dozen vintage cars were on display in the spectator concourse, with several cars taking parade laps prior to the first race.

The 25 lap ARCA R & M Recycling Late Model Sportsman feature saw Andy Harding take the lead at the green flag.  On lap 4, Stilwell dove low coming out of turn 4 to grab the top spot, with Allen following in his tracks.  The race ran caution-free, as Greg stayed in command to take his 4th win of the season. Allen remained in second at the stripe, giving him the 2021 track title, his 10th overall in the class, edging out Stilwell by 15 markers.  Harding was third, Dillon Zalenski fourth and Mike Young fifth, followed by Robert Meiring, Todd Perkins and Dan Grigsby.  Jim Brazeau did not start the race.  Stilwell and Zalenski took the heat race wins.  Allen posted fast time at 17:038. 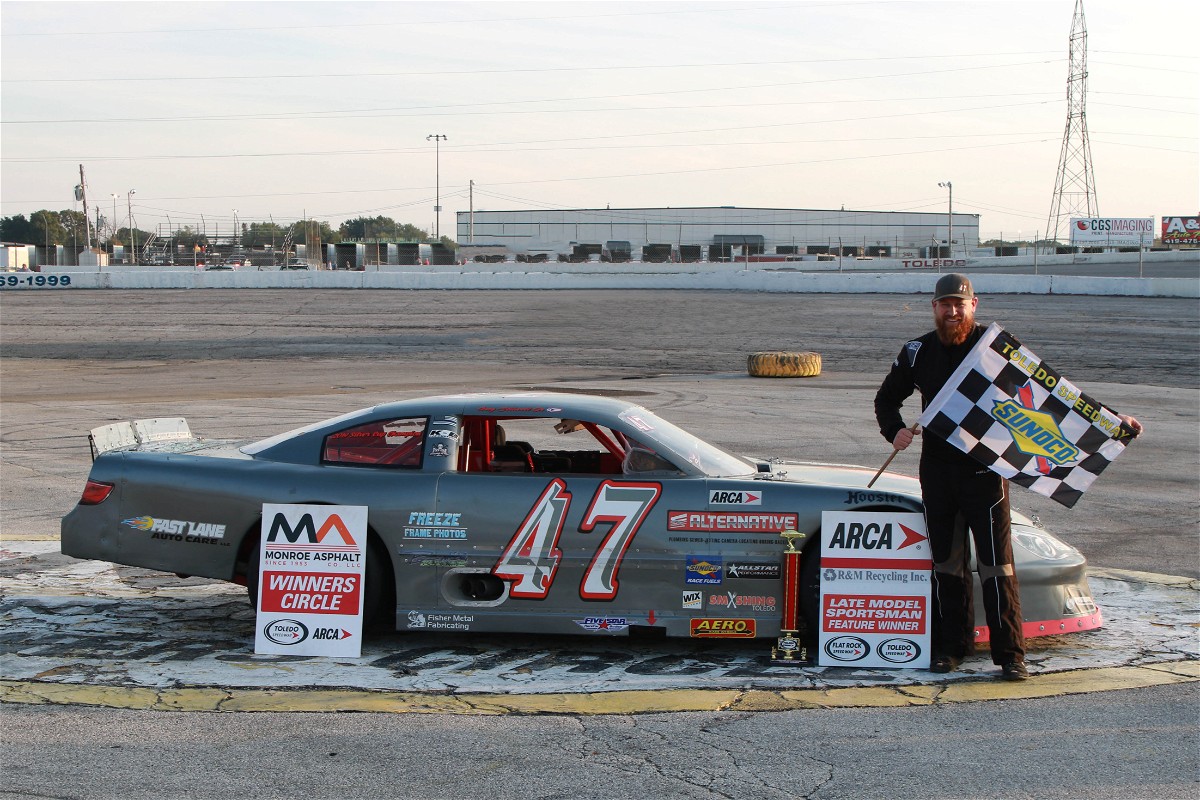 Race leader Randy Padgett Jr. showed the way for the first 23 laps of the 25 lap The Vault Antiques and Treasures ARCA Factory Stock feature, but slipped up the track just enough to allow point leader Jeff Metdepenningen to steal the lead and the victory, cementing Jeff’s title for the division in the process.  James Rae was third, Matt Bunting fourth and Steven Smith fifth.  Mike Miller, Gabrielle Grigsby, Brian Ringger, Destinee Arnold and Craig Osenbaugh completed the top ten finishers.  Race Metdepennigen, Jesse Carrillo, Kenyon Knight, Logan Bunting, Hunter Padgett and Brad Turner were next in line at the stripe.  Jeff’s championship is his first in the class, as he topped Steven Smith by 55 points.  Jeff set quick time at 11:677.  Matt Bunting and Turner took the heat race wins. 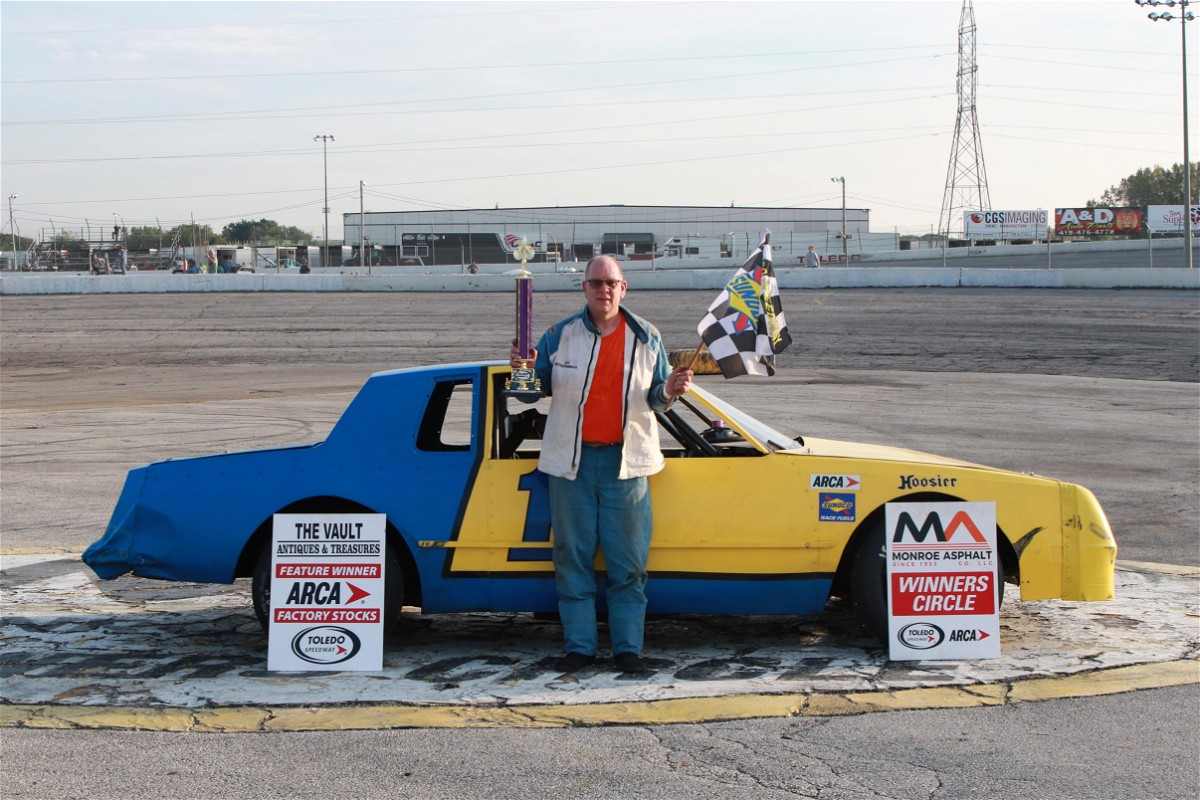 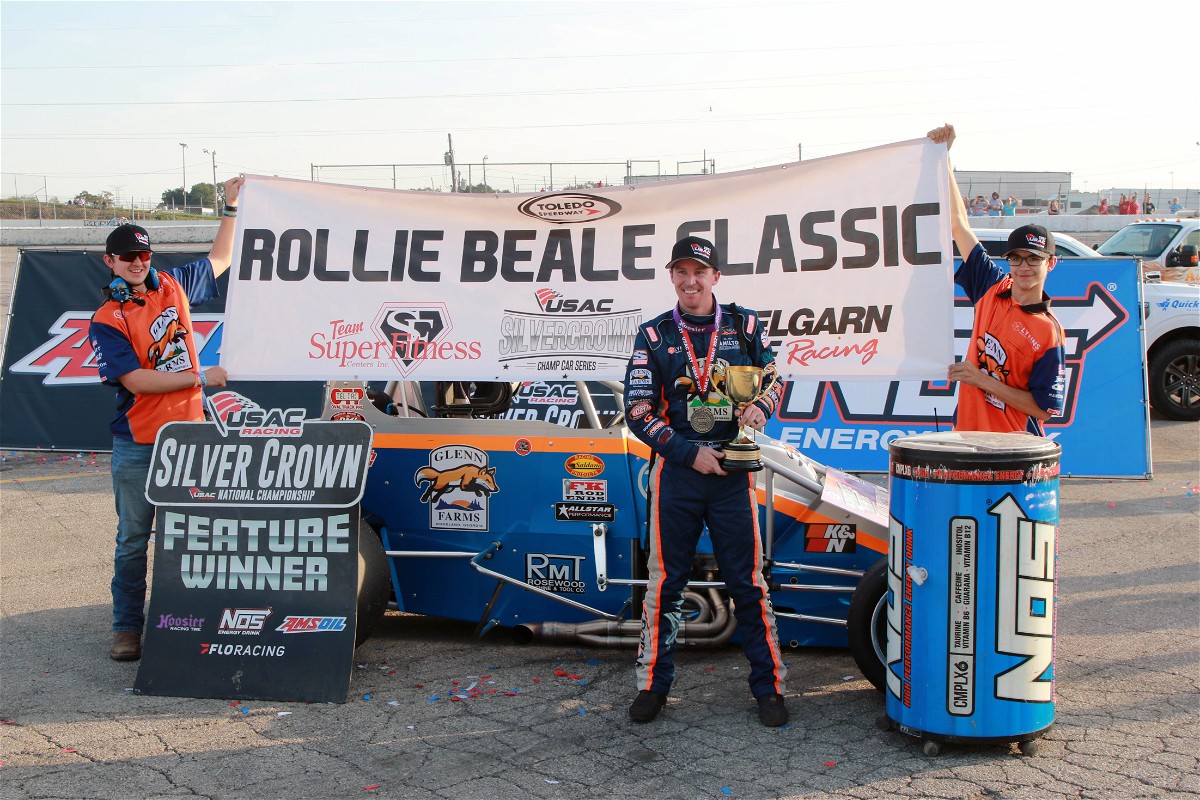 The first 83.5 trips around the half-mile paved oval were relatively free of stress for Swanson, but a bit of turn three duress nearly derailed both his bid for the race win and another Silver Crown driving title.

With Swanson alone at the head of the field, the car of 13th running Annie Breidinger slid sideways against the turn three wall, right into the path of Tyler Roahrig, who T-boned Breidinger’s idle machine at the top of the banking.  Next in line was Swanson who smashed the left front of his nose and wheel into the rear bumper of Roahrig, testing the maximum limits of metal’s unmalleable flexibility.

A major puncture wound to the nose and a bent axle became the battle scars Swanson carried for the final 13 circuits en route to victory, and despite all the lingering circumstances, Swanson remained untouchable and unmalleable in his own right.

“I’m so fortunate and so thankful for this entire Doran Racing team, all the effort they put in all year and for this race that I can screw something up and still have a chance for it at the end.

The lapped car spun in front of us, and Tyler (Roahrig) and I were already there and trying to figure out a way through because I knew Bobby (Santos) was coming,” Swanson continued.  “I bent the front axle up on this thing but, luckily, during the caution, I could scrub in front of the pits, and they could tell, ‘hey it’s going to fit.’  That’s part of it.  It’s your job to finish it in the end.”

The only blemish on an otherwise spotless drive was as a victim of momentary circumstance in his Doran Enterprises/Glenn Farms – Lykins Energy Solutions/Beast/Lanci Ford, a race in which he captured the pole, led all 100 laps and earned a feature win, all while becoming just the third driver in history to sit on the pole, win the race and corral the series title all in a single day’s work, and the first to do so in a quarter century – Jimmy Sills in 1996 and Steve Butler in 1992.

Swanson entered the day with a one-point lead over Logan Seavey in the championship race.  After adding three points for winning the pole, Swanson carried a four-point advantage into the season’s curtain closer, which had been slightly delayed by morning showers.

Jetting out to the early lead was Swanson while third-starting David Byrne slotted into second and was affixed to Swanson's rear bumper from the onset of the opening lap while outside front row starter Justin Grant, the defending series champ for one more day – slotted into third.

The same three continued to breakaway from the rest of the field throughout the first 20 laps until eighth running Kyle Robbins jettisoned his left rear wheel as he made his way down the front straightaway.  As he skidded along the pavement, alongside his dribbling wheel/tire, he was dotted in the rear bumper by Davey Hamilton Jr. while both Seavey and Nathan Byrd scattered to and fro to successfully avoid a major catastrophe.  The day, however, was finished for Robbins.

The most frightening incident of the day occurred on the 38th lap when contact between Jim Anderson (13th) and Taylor Ferns (14th) in turn two sent Anderson spinning 180 degrees, rear first, into the outside back straightaway wall.  As Anderson’s car sat motionless, a split second later, Travis Welpott (16th) ramped his right rear over the left front of Anderson, sending Welpott flipping down the back straightaway before bouncing back on all four wheels into the turn three infield grass.

All drivers walked away from the incident.  Unrelated to the melee, third-running Grant was black flagged for spilling fluid onto the track.  He’d ultimately return but dropped out on lap 48 while running 15th.

Swanson maintained a two second lead as the race hit the second half with Santos now becoming a player in the game with a move into second on lap 62 as he ripped around the outside of Byrne off the fourth turn.  Suddenly, the gap between Santos and race leader Swanson began two dwindle, with nearly a full second cut off his lead.

Swanson put his championship competition of Seavey a lap down on lap 75 and was on cruise control, up 1.5 seconds at that particular point when the aforementioned near disaster between he, Breidinger and Roahrig occurred with 17 laps remaining.  A highly noticeable gaping hole was visible on the front of Swanson’s ride for the remainder of the race, in which he kept 2017 Toledo Silver Crown winner Santos at bay to score his 34th career series event by a 1.135 second margin over Santos, Brian Tyler, Byrne and Hamilton Jr.

Brian Tyler’s first USAC Silver Crown pavement start since 2013 resulted in a third-place finish aboard his BCR Group/Flint Trucking – QS Quality Components – Duncan Oil/Beast/Kercher Chevy.  For the Parma, Mich. native, it was first “podium” finish with the series on pavement since winning at New York’s Oswego Speedway in 2009.

Furthermore, Tyler and Russ Gamester both wrapped up their 201st career USAC Silver Crown starts on Sunday at Toledo, tying them for the all-time record in that category alongside Dave Darland.