Toledo, Ohio-September 18, 2021:    Cayden Lapcevich was the winner in the 100 lap Outlaw Super Late Model feature, while Blake Rowe pulled the big surprise of the night, leading only the final lap in one of the best races in the history of this event as he captured top honors for the ARCA/CRA Super Series powered by Jeg’s Late Models Saturday night at the Central Transport Glass City 200 presented by Courtyard by Marriott, Hampton Inn and DTS Drive Train Specialists at Toledo Speedway.   Kaden White took the CRA Jr. Late Model victory on a very pleasant evening.  Carson Lucas took the Jr. Late Model championship. 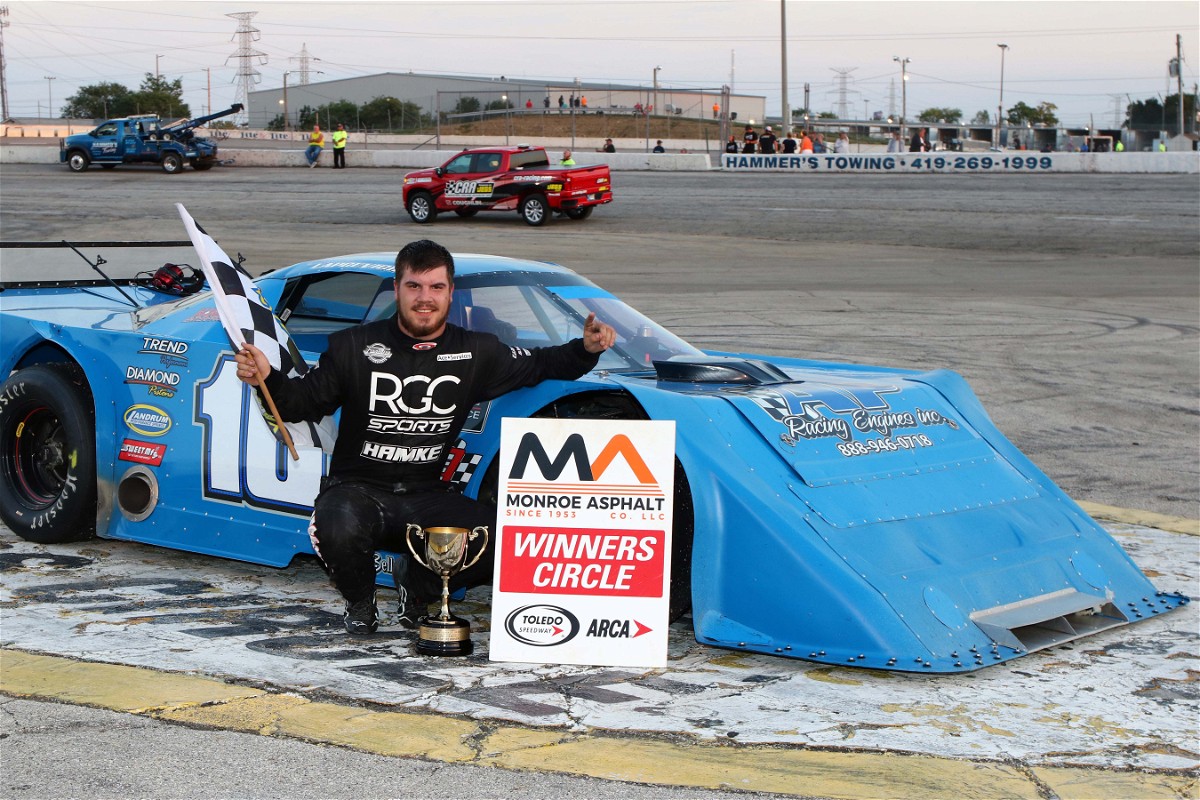 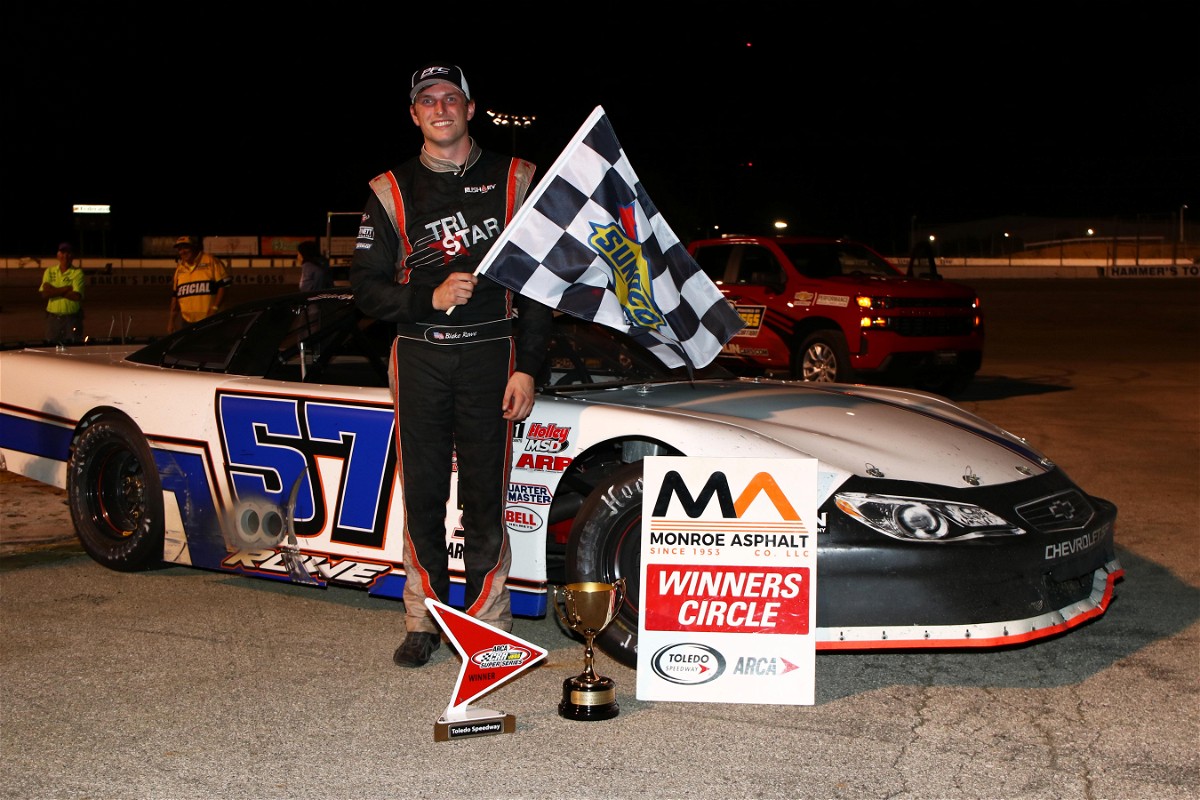 The 9-car inversion put Nick Bailey and Ray Clay on the front row.  Bailey grabbed the point for the first 3 laps, with Harold Fair Jr. taking the lead on lap 4.  Fast qualifier Steve Needles and Lapcevich were on the move quickly as Cayden was up to third and Needles to fourth spot by lap 9.  Lapcevich reeled in Fair, while Needles, the defending race winner, went down pit road in a cloud of smoke on lap 19, ending his bid for repeat.  Lapcevich pushed Bob Blount’s #16 into the number 1 spot on lap 20 and set sail, building up a solid lead.  Frank Jiovani was up to third by lap 37, while Scott Hantz pitted and was done for the day on lap 45 while running fourth.  At lap 50, the top 5 were Lapcevich, Fair Jr., Jiovani, Dennis Strickland and Nick Bailey.

The night’s finale’ will go down as one of the top races and best finishes in Glass City history and Toledo history, for that fact.  A sensational battle up front for the final 20 laps saw Blake Rowe stun the field and the crowd, taking the lead on the white flag lap, nosing under Kyle Crump to steal the victory.  Hunter Jack led the first 42 laps, until Carson Hocevar took control of the event.  Carson held the point and had a comfortable advantage as Brian Campbell moved into the top 3, as he and Hunter tried to stay within striking distance of Hocevar, the current NASCAR Truck Series leading Rookie and title contender.

Carson jumped back out front again, choosing the second lane of the lap 74 restart.  Jack, the point leader going into the event, retired on lap 73 while running second, while Campbell’s night ended on lap 76, going pit-side with mechanical issues.  Crump, who started at the tail of the field for an impound infraction, had now moved into contention with a shot at the number 1 spot. The yellow flew again on lap 80 when Scott Tomasik spun, setting up the sensational final 20 laps.

Kyle dove under Carson on the lap 80 restart, as that duo swapped paint and fenders lap after lap.  2 laps later, Crump took the top spot, using the high groove as Hocevar came right back to get side by side with Kyle.  On lap 96, the pair flipped lanes, sending Crump to the bottom.  The next lap, the pair banged wheels going into turn 1, with Hocevar sliding up the track and coming to a stop, bringing out the yellow and Carson to the tail of the pack.

On the lap 97 restart, Dalton Armstrong was now on the high side of Crump, but fell back at the green flag.  Rowe, who had reeled in the leaders, now was in the mix as he dove under Kyle.  At the white, Rowe nosed by Kyle, took the lead and the crowd rose to its feet as Crump again darted low coming out of turn 4, getting to the front tires of Rowe’s #57, just inches short as Blake Rowe scored the huge upset win over Crump, Hocevar, Jack Smith, Armstrong, Rick Turner, Cody Coughlin, Scott Tomasik, Albert Francis and Bill Burba.  This was Rowe’s first race at the Glass City oval.  Campbell, Hunter Jack, Brandon Varney, Evan Varney and Tanner Jack were next in line at the finish.

As a note, this story will never be able to do justice to the incredible and exiting final 20 laps of the ARCA/CRA race…Glass City history, to be sure!

The CRA Jr. Late Models ran a 25-lap contest on the short track for their championship event for the 2021 season.  Kaden White topped Keegan Sobilo and Carson Lucas in the feature event, with Lucas notching the Season title.  Carson took the heat race win. 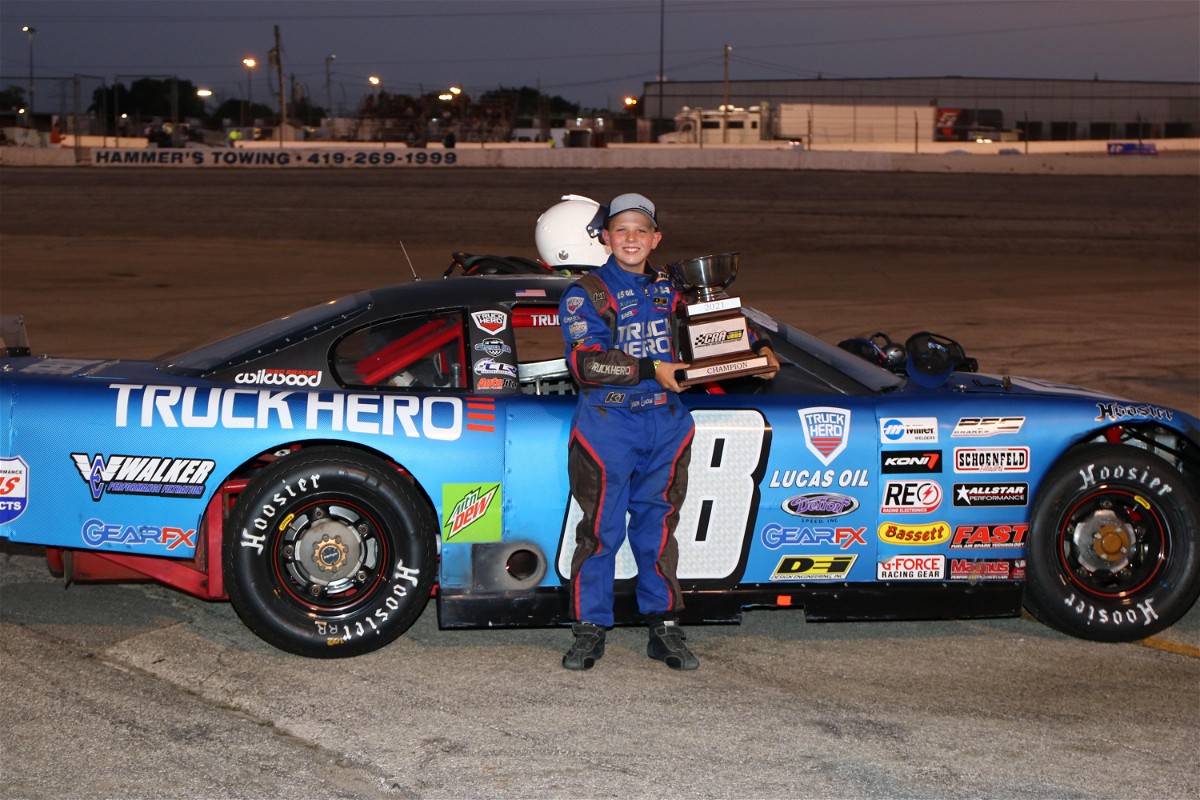 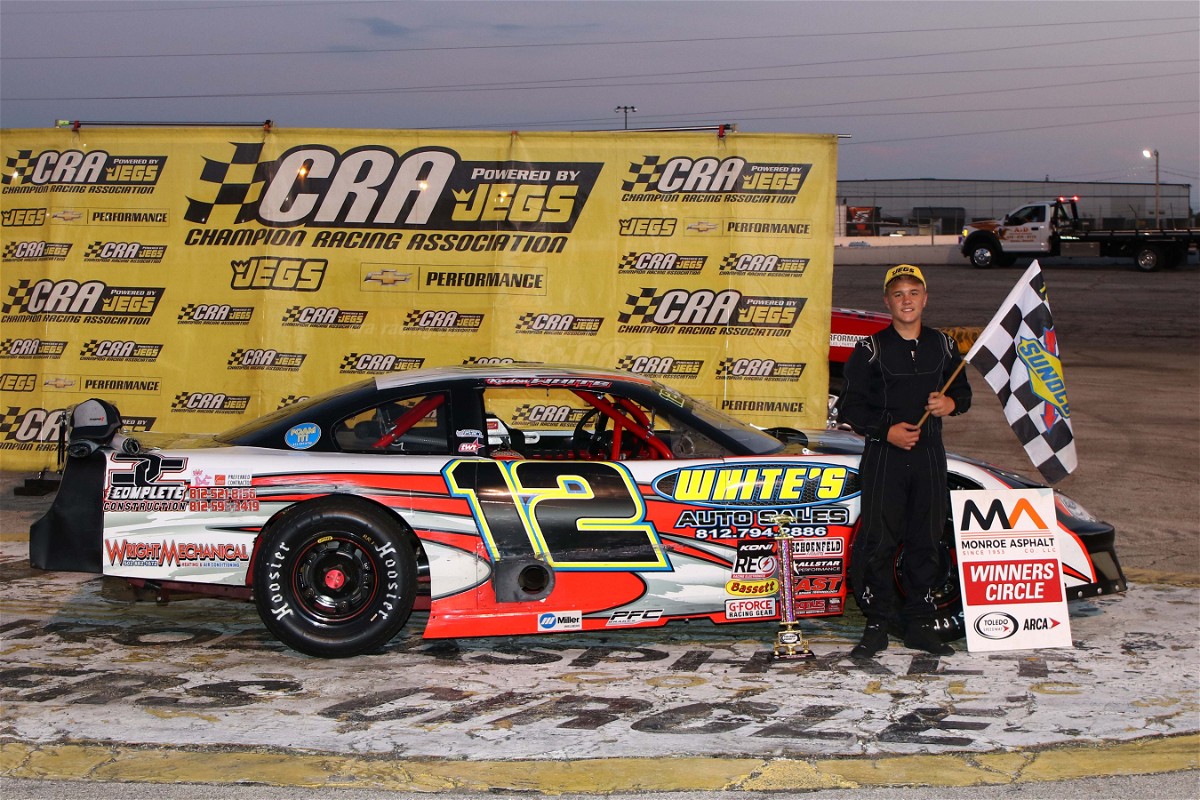 In pre-race ceremonies, 2000 Glass City 200 winner Tim Ice was introduced as the Grand Marshal of the event.  Tim was presented with a Lifetime ARCA Gold Card membership from Toledo Owner and Promoter Ron Drager.  Larry Varney of LV Alliance presented trophies to the Fast Qualifiers Steve Needles for the Outlaws (15:014) and Hocevar (15:593).  Both drivers also collected a $300 bonus from Varney for their quick times. 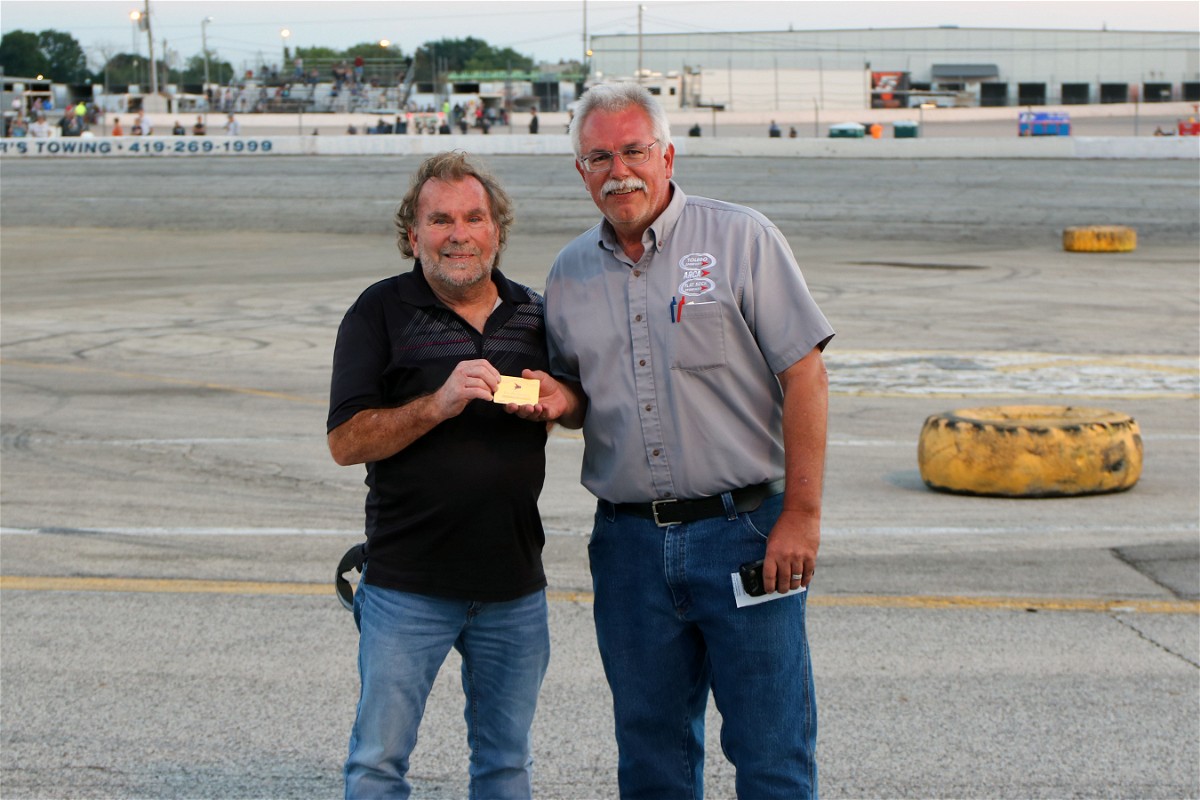 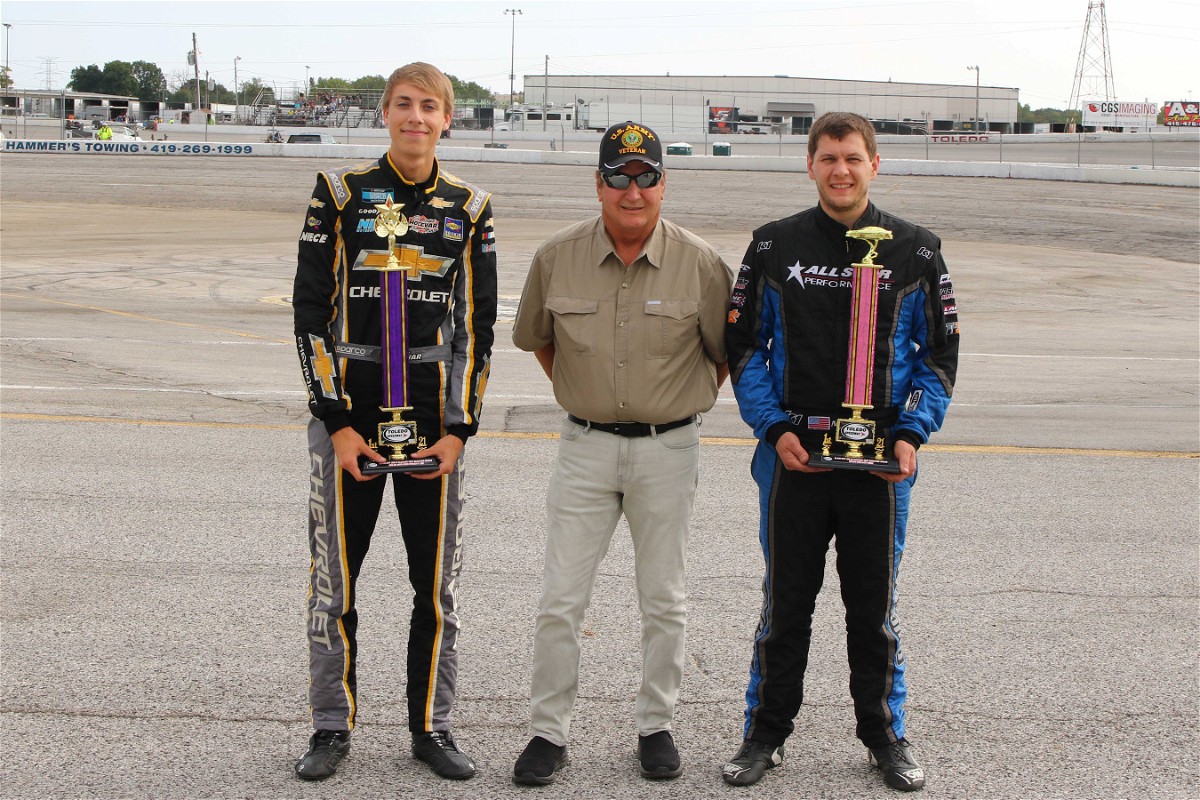 Clean Harbors and Safety-Kleen conducted a drawing on race day for fans for a NASCAR Driving Experience and an item autographed by Richard Petty.  The company also posted bonus money for the Outlaw Super Late Model portion of the event.

The 2021 Toledo Speedway season champions for the ARCA R & M Recycling Late Model Sportsman and The Vault ARCA Factory Stocks will also be determined October 10 for the Sunday afternoon contest.  A Vintage race car display and parade laps and an open-wheel Racer’s Reunion will also be a part of the final racing event of the season at Toledo.

Advance tickets are available online at www.toledospeedway.com or by calling the track at 419-727-1100.  All seating is general admission.  Tickets are $25 for adults, children 6-12 are $5 and under 6 are free.  Please add $1 per ticket for online purchases.  The advance sale ends at 5 p.m. the Friday, October 8.  Tickets will go back on sale race day at the track only at 11:30 a.m.  There is no rain date for this race.