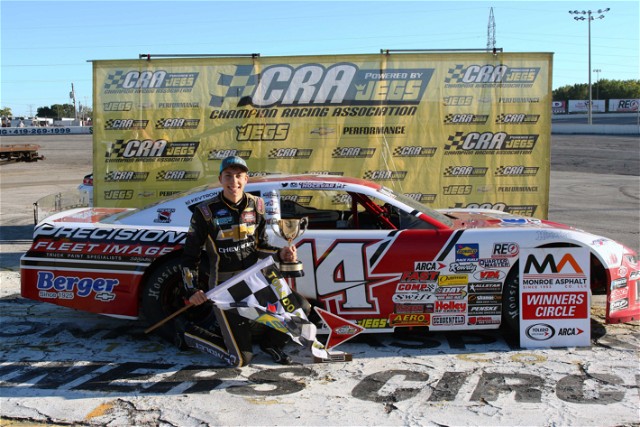 The ARCA/CRA Super Series Powered by Jeg’s Late Model 100 lap contest saw just 1 yellow flag.  Youngster Sammy Smith brought the 19 car field to the green flag and let the first 13 laps, until Hunter Jack powered by to take the lead.  Hocevar, one of the hottest Late Model drivers in the Midwest, steamed by on lap 40 and zipped away, building a sizable lead as the long stretch of green flag allowed the 17 year old rising star to stretch the gap.  Smith, who fell back a few spots, made a big charge in the final 40 tours and got back to second spot as Hocevar claimed the victory.  Fast qualifier Cayden Lapcevich (15:396) was third, Jack fourth and Cody Coughlin fifth.  Jake Garcia, Brian Bergakker, Michael Simko, Greg VanAlst and Logan Runyon completed the top ten.

Steve Needles has had the Glass City race in the bag on several trips to Toledo for this prestigious race, but lady luck was never on his side.  He’s led the race with 4 to go and the stories of woe have accumulated over the years.  In this year’s edition, Needles put all those memories to rest as he led the final 28 laps to claim his first Glass City Outlaw Late Model 100 lap win.  An elated and emotional Monroe Asphalt Winner’s Circle for the #14 was on display as Steve and his crew celebrated the hard-fought win.

The 10-car inversion put first-time Toledo visitor Brandon Short, Needles teammate, on the pole, alongside Dennis Strickland.  Brandon took the lead on the start, with Strickland applying the pressure.  Dennis took the number 1 spot on lap 20, as the first 41 laps had incredible racing action and a tremendous pace.  The first of 3 yellows came out on lap 41 when Short and Cayden Lapcevich made contact, with Short spinning in turn 4.

Strickland, the 2013 Glass City winner, continued his strong run on the restart and held the point, collecting the Performance Images/Michigan Auto Racing Fan Club $100 Half-Way Award.  Yellow number 2 appeared when the engine let go in Short’s machine on lap 59, bunching the field.  Brian Bergakker had picked his way through the strong, competitive 22 car field and was now second on the restart.  Brian wasted no time as he dove under Strickland on lap 60 to gain the lead.  Needles was on the move and had been in the top 5 for much of the race.  At lap 73, Steve drove by Bergakker to grab the lead and began to build a comfortable margin over Bergakker, Frank Jiovani, Lapcevich and Strickland.

The final yellow of the night was out on lap 93 when Bergakker ran out of fuel, coasting to a stop on the front stretch.  Needles was not to be denied as he took control on the restart and held form on the final 7 laps to claim the victory.  Jiovani’s strong run, where he ran in the top five the entire distance, gave him second spot. Lapcevich came back to take third, Strickland was fourth and Scott Hantz, Jiovani’s teammate for the day, was fifth.  Steve Cronenwett Jr. ran strong to take sixth, Nick Bailey came from 22nd to 7th and took the Moran Chevrolet $100 Hard Charger bonus, while rookie Guy Fire was 8th, rookie Austin Thiel 9th and Dennis Rederstorf tenth.

Lapcevich doubled up on the Fast Qualifier Awards, as he picked up the LV Alliance $200 bonus for the Outlaw Late Models with a lap of 14:744.  Larry Varney made the presentation to Cayden for his top lap. 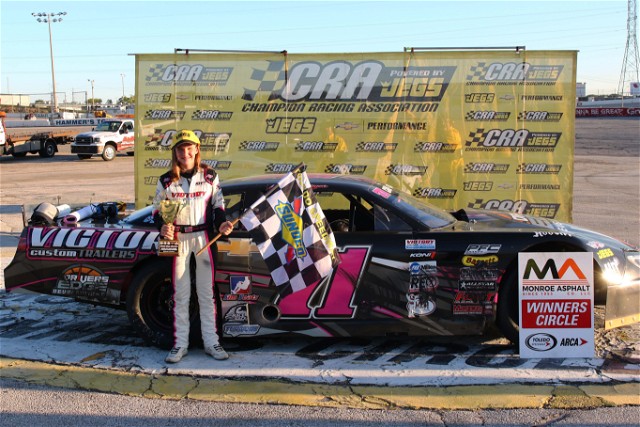 Toledo Speedway will conduct 1 final race for the 2020 season.  A tradition at Toledo since the 1960s is United States Auto Club (USAC) open-wheel racing, and the USAC Silver Crown Series will be on hand as scheduled on Sunday, October 4. The Rollie Beale Classic  is sponsored by Hemelgarn Racing and SuperFitness.  A special addition to the race card for that date will be racing for four divisions of ARCA stock cars featuring local drivers—the ARCA Sportsman, ARCA Street Stock, ARCA Figure-8 and ARCA Factory Stock classes.  The afternoon season finale will have the spectator gates opening at 11:30 a.m. and racing starts at 2 p.m.

Per the local health department, only 1500 tickets may be sold for the grandstands.  Advance tickets are available only online at www.toledospeedway.com.  Any remaining tickets will be available at the track on race day at the ticket office.