Toledo, OH—September 21, 2019:  Cayden Lapcevich powered by JR Roahrig on a restart with 3 laps to go as he grabbed the victory in the ARCA Late Model Gold Cup Series 100 lap feature as part of the Central Transport Glass City 200 presented by Courtyard by Marriott and Hampton Inn at Toledo Speedway Saturday night.  Johnny VanDoorn sailed away to the win in the ARCA/CRA Super Series powered by Jeg’s Late Model 100 lap nightcap.  Chase Burda was victorious in the 30 lap CRA Jr. Late Model feature.  All 3 drivers were greeted by Central Transport and Courtyard by Marriott personnel for the trophy presentations in the Monroe Asphalt Winner’s Circle.

1999 Glass City winner Tim Felver was honored as the Grand Marshal, and received an ARCA Lifetime Gold membership card from ARCA President and Toledo owner and promoter Ron Drager.  Past Glass City champion Danny Byrd (1972) was also in attendance. A 90 minute rain delay that hit the track at 5 p.m. pushed back the schedule a bit, but action began as planned.

The 11 car inversion for the Gold Cup Series saw Albert Francis and Jack Varney Jr. on the front row.  Francis motored into the lead as the first 25 laps went green flag.  Kyle Crump stayed glued to Francis’ bumper and dove under Albert on lap 16 to take the lead.  The very competitive field saw battles for position throughout the pack.  2018 race winner Tyler Roahrig dropped out on lap 23.  The yellow flags were for minor incidents.  At the lap 25 mark it was Crump, Lapcevich, Francis, Brian Bergakker and Steve Needles.  Bergakker, the point leader going into the event for the ARCA Gold Cup Series, was now at the wheel Kalamazoo track champ Adam Terry’s #4 machine and was very strong.

Francis dropped out after diving down pit road, as did Varney Jr. before the race resumed.  When the green came back out,  Needles began to move up to the front and got by Crump on lap 40, taking the number 1 spot.  Steve was strong and it appeared that the curse of the Glass City finishes for him might be over.  Needles now had company from JR Roahrig as the 2-time race winner began to close in.  The duo began to pull away from the rest of the field by lap 60.  The red flag came out on lap 87 when 5th place runner Frank Jiovani pulled off in the grass on the back chute, with smoke pouring from his machine.  While Jiovani’s night was over, Needles was having mechanical issues when the cars rolled away to prepare for the restart.  Steve took his #14 down pit road, again ending his bid for a Glass City win.

Lapcevich had remained in the hunt and was now on the outside of Roarhrig coming to the green on the lap 87 restart.  The duo ran door to door for a pair of laps until Cayden pulled out front.  10 laps later, the yellow flew again, setting up a 3 lap shootout.  The #16 of Lapcevich edged out front and got the jump he needed to take the lead.  Crump snuck under JR with 2 laps to go as Lapcevich took the checkered flag and the $5000 top prize.  Kyle Crump, JR Roahrig, Brian Bergakker and Mike Root were the top five, all on the lead lap.  Mike Mazzagatti was sixth and Jason Felver, in his first Toledo race, was 7th, with both those drivers also on the lead lap.  Chris Benson, Dennis Rederstorf and Tom O’Leary IV completed the top 10.

Lapcevich also took home a $250 product certificate from Penske Shocks.  JR Roahrig topped the 26 car field by claiming the $500 LV Alliance bonus for fast time at 14:977.  Larry Varney of LV presented JR with the trophy and bonus.  Bergakker only needed to take the green flag and with it Brian claimed the 2019 ARCA Gold Cup Series championship.

Two quick yellows and a lap 30 red flag slowed the action in the ARCA/CRA 100, but when the race resumed the final 70 laps were straight green flag.  VanDoorn motored away from the field as he zoomed to the win.  Hunter Jack led the first 32 laps until VanDoorn dipped low and slid by Hunter for the number 1 spot.  Fast qualifier Travis Braden (15:266) was in the top 5 but dropped out of the event on lap 53.  Crump and Josh Brock also moved by Jack a few laps later, but the fleet VanDoorn was gone as he built up a straight-away lead on the rest of the field.  With that 70 lap green flag stint, there was no catching Johnny on this night as he scored his second Glass City win of his career (the first one was in 2017) and the $5000 top prize.  Crump completed a great night with another second place run. Josh Brock and Brian Campbell were third and fourth, respectively, all on the lead lap. Wisconsin native Dalton Zehr made his first Toledo appearance and came home fifth, 1 lap down.  Cody Coughlin, Greg Van Alst, Austin Kunert, Shawn Amor and Jack completed the top 10.  Albert Francis, Jerry Artuso, Hayden Sprague, Brett Robinson, Brandon Varney, Braden, Jordan Pruitt, Harold Fair Jr., Scott Hantz and Jack Dossey Jr.  were next in the final rundown. 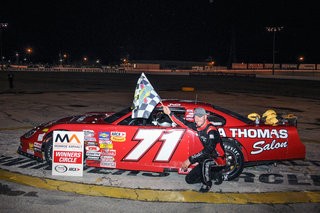 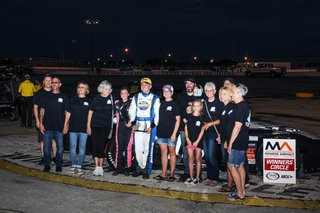 Toledo Speedway’s 2019 racing schedule is now complete.  The 2020 schedule is expected to be released near the holiday season.