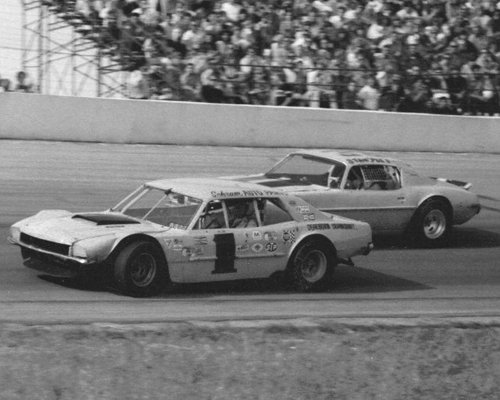 In 1968, ARCA founder and Toledo Speedway promoter John Marcum decided to add a race to the end of the Toledo Speedway season-the Glass City 200. Marcum was promoting races all over the Midwest with success. Toledo was the prime track to stage one of these races. The race would gain immediate prestige and recognition as one of the top season-ending classics.

Joe Ruttman, the 1969 champion, returned to claim his second victory in the 200-lap classic. This year’s event was titled the Marathon 200, which was the race sponsor. Ed Howe flew in his familiar green Camaro to quick time at 17.81 seconds leading the 55-car field. Howe shared the front row with John Anderson in the Stan Yee prepared Camaro. Anderson jumped into the early lead, holding the point until lap 48 when Ruttman blasted by Anderson entering turn one and led the remainder of the first leg. At the halfway break Artie Sommers, Jim Bickerstaff, Jerry Makara and Dick Crup rounded out the top five.

Ruttman parked his familiar # 70 Chevelle towards the end of the 1973 season in favor of piloting Joy Fair’s new controversial 4-door Maverick. Ruttman, Fair's protégé, was asked to take over the potent Bob Gillean-Russ Wainscott ride while Fair recuperated from a devastating early season crash at Toledo.

Smooth driving Bickerstaff turned in an impressive performance, charging from twenty-third starting position to finish third in the first half. He advanced into the main event by winning one of two consolations after arriving to the track after time trials.

Sommers led the start of the second leg until lap three when Ruttman took over. He proceeded to dominate the field on the way to his second triumph in the classic. Howe finished second in Bickerstaff’s Camaro after crashing in the third turn on lap 38. Ohio speedster Tony Diano was third, Mike Shaw fourth and Steve Asztalos fifth. Ruttman pocketed $3,000 for the overall victory followed by Bickerstaff, Diano, Shaw, and Steve Asztalos.

The seventh annual classic brought the largest and most competitive field of cars, as 76 entries filled the pits. Harold Cook, in the immaculately prepared Fred Swing Camaro, won the pole with a 17.55 second clocking. Cook blasted into the lead from his front row position to lead the first six laps before erupting an engine going down the backstretch. Bob Senneker took over and led until lap 11 when John Anderson grabbed the top spot. Short Track legend and longtime NASCAR competitor Dick Trickle made his initial Toledo appearance, qualifying fifth. Trickle spun in Cook’s oil and was sent to the rear. This set the stage for one of the most impressive charges ever witnessed on the high-banked oval. Trickle worked his way up towards the front only to be involved in a skirmish with Lennie Waldo. Trickle again was sent to the rear and started his relentless charge through the pack, eventually passing Anderson on lap 85 and leading 2 laps before his SuperAmerica-sponsored Mustang gave out. Anderson re-inherited the lead and held off Senneker, Tony Diano, Art Sommers and Ed Hage to the finish. 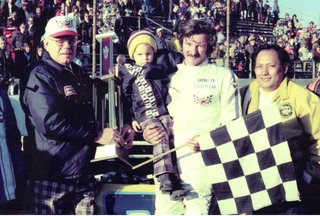 The second leg was a run-away for Anderson, piloting Stan Yee’s famed number 33, as he led all 100 laps on his way to a $2,415 payday in his first Glass City triumph. Waldo, Senneker, Danny Byrd and Randy Sweet followed. Following Anderson to the overall finish was Senneker, with Randy Sweet and Joy Fair tied for third. Ed Hage rounded out the top five with an impressive run as he advanced to the main through one of two consolations.

The 1975 classic saw two of Michigan’s all-time greats-- Joy Fair and Bob Senneker --capture 100 lap wins. Tommy Maier out-qualified an impressive 55-car field with a 16.92 clocking. Maier started on the pole but gave way to Senneker on the green flag. Maier battled back to overtake Senneker on lap four and proceeded to hold the point until lap 33 when he pitted with rear end problems. Senneker regained the point but it was short-lived as Joy Fair motored past in his Dearborn Crankshaft sponsored Mustang. Fair would go on to win the first leg convincingly in record time of 29:49.81 minutes. Following Fair to the finish were Rick Knotts, Jim Bickerstaff, Bob Schippers and Bob Sensiba.

Fair started on the pole of the second hundred and jump out into the lead, followed closely by Ohio sensation Jim Bickerstaff. The two battled bumper to bumper throughout the second leg.   It appeared Fair would sweep the event until lap 81 when he and Bickerstaff got together coming off turn four. Fair was placed at the rear while Bickerstaff inherited the lead, which he held until lap 88 when Bob Senneker passed him on the inside off turn 2. Senneker would go on to win the second leg over Bickerstaff, Maier, Randy Sweet and Rick Knotts.

Jim Bickerstaff, by virtue of his second and third place finishes became the first and only Ohio driver to win the Glass City 200, Second overall was awarded to Knotts followed by Fair, Schippers and Jerry Makara. 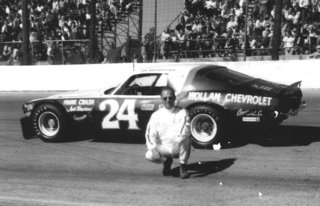 Saturday, September 21, the 31st Running of the Central Transport Glass City 200 presented by Hampton Inn and the Courtyard by Marriott race day begins with registration at 9:30 a.m. and the pit gates opening at 10 a.m. Practice will go from 1 p.m. to 4 p.m., with qualifying at 4:30 p.m. The

ARCA Gold Cup Late Models will be shooting for the $500 LV Alliance Fast Qualifier bonus. An on-track autograph session will take place at 5:30 for all divisions. Pre-race driver introductions and ceremonies will begin at 6:30, followed by the race card