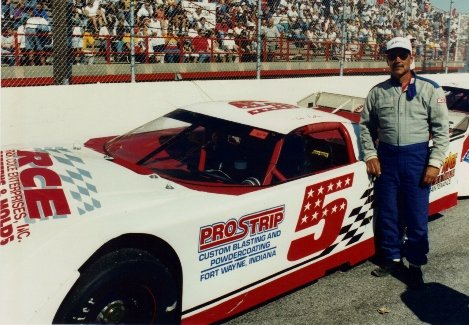 Felver captured the 200 lap contest for the outlaw-bodied Late Models in 1999, the event that brought back the prestigious race to Toledo for the first time since 1977. Current Toledo owner and promoter Ron Drager and his business partner, Roy Mott, purchased the track in January of that year and promptly returned the race to the schedule for that season.

Tim piloted the #5 machine owned by legendary car owners Dean Hudson and Larry Zent to the victory. In a bid to repeat that win in 2000, Felver was in the lead with 9 laps to go, but tangled with his teammate, Canadian star Jr. Hanley, ending his chances to become a repeat winner of the classic.

Felver, a member of the Michigan Motorsports Hall of Fame, will be honored in pre-race ceremonies for the 200 Saturday, September 21. All past Glass City 200 winners have also been invited to the race and will be introduced to the crowd.

The 200 format has 2 divisions of Late Models in competition, which was put into play with the 2017 version of the Glass City. Defending race winners are Tyler Roahrig (ARCA Gold Cup) and Tyler Ankrum (ARCA/CRA).

Both groups of Late Models will run 100 lap features, with each race paying $5000 to win and $800 to start. The total purse exceeds $60,000. The outlaw-bodied ARCA Gold Cup Late Model Series and the ARCA/CRA Super Series powered by Jeg’s stock-bodied Late Models will each battle in the 100 lap main events on the fast ½ mile paved oval.

The outlaw 100 lap event will also be the final point race for the Gold Cup Series. Brian Bergakker leads the pack after 5 races and has a comfortable lead over Dennis Strickland and Frank Jiovani.

Friday, September 20 rig parking only will take place from 6 p.m. to 7 p.m. There will be no on-track action.

Race day begins with pit registration at 9:30 a.m. and the pit gates opening at 10 a.m. Practice will go from 1 p.m. to 4 p.m. Qualifying will begin at 4:30 p.m., with the outlaw-bodied Late Models shooting for the $500 Passtime Fast Qualifier bonus. The newly-created CRA Jr. Late Models (for drivers ages 10-15) will be a part of the Glass City event for the first time and will run a 30 lap feature on the ¼ mile oval.

An on-track autograph session will take place at 5:30, followed by driver introductions and pre-race ceremonies at 6:30 p.m. The race card will immediately follow.

Both general admission and reserved tickets are now on sale by calling 419-727-1100.