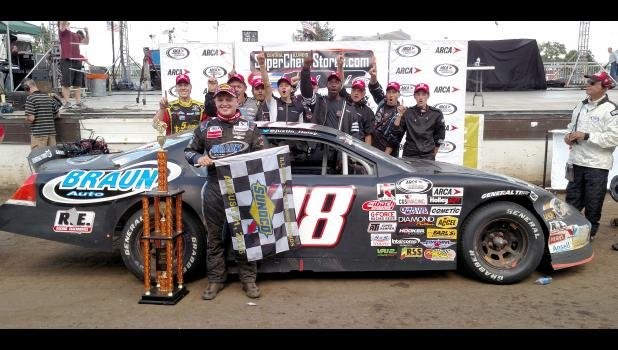 Justin Haley, who was the first 14-year-old to be approved to race in the ARCA Sportsman division at Toledo Speedway, scored his first Monster Energy NASCAR Cup Series win in an improbable upset in the Coke Zero Sugar 400 at Daytona International Speedway on Sunday afternoon.

Haley was running near the tail of the lead lap under caution with 34 laps to go when the field was given the one-to-go signal. Kurt Busch led most of the lead lap cars down pit road, but Haley stayed out to take the lead for the impending restart. A lightning strike within eight miles of the speedway put the entire facility under NASCAR's lightning protocol, which calls for a 30-minute delay after each succeeding lightning strike to ensure the safety of everyone at the track. As NASCAR waited for lightning to clear the area, heavy rain moved into the area and forced an early end to the race.

"I didn't do anything," he joked with his uncle Todd Braun, a former NASCAR XFINITY Series team owner, in the moments after the race was called. "It's a blessing. It's incredible to have so many great people to allow me to race on this stage. I never saw myself running a Cup race until I got the call and the opportunity to race at Talladega a couple of months ago. It's unreal. I don't know how to feel."

"The stars aligned. I didn't think I would get redemption after the XFINITY win was taken from me last year. This makes finishing second on Friday night that much better."

Haley has three ARCA Menards Series wins in just 16 career starts. He scored his first win on the mile dirt at Springfield in 2016 driving for Mason Mitchel Motorsports, then won at Talladega in 2017 driving for MDM Motorsports. His final career ARCA win came in 2017 when he at Pocono driving for Mitchell.

Haley's crew chief Peter Sospenzo is himself a former ARCA driver, having made six career starts with a best finish of ninth in Atlanta in 1988.

Awesome kid! He is sure a good contender from now on.