Toledo, Ohio-June 14, 2019: All American Coach hosted Kids Night Friday evening at Toledo Speedway. A perfect weather picture greeted the fans that turned out for the race card. Kids to age 12 were admitted free and received a free hot dog, compliments of the speedway. The track also hosted Whelen First Responders Night, as all First Responders were admitted free for the night of racing. Tom and Jim McGuire and their family members of All American Coach presented the trophies in the Monroe Asphalt Winner’s Circle.

A sensational finish had the crowd buzzing as Tommy O’Leary IV nosed out Greg Stilwell by inches to win the 25 lap ARCA R & M Recycling Silver Cup Series Late Model Sportsman feature event. The event began with O’Leary taking the lead on the green flag. Within 2 laps, the top 6 cars ran nose to tail, setting up for what appeared to be an interesting race. O’Leary led the way, with Greg Stilwell tucked on his back bumper, Kent McCloskey third, Mike Young fourth Grant Hedges fifth and Howard Kelley Jr. in sixth spot. On lap 10, Young slipped under Kent to take third. Everything went sideways on lap 12 as Young blew the engine in his car entering turn 3 and coating the track with oil. Hedges and Kelley had no chance, as they slid up the track in the oil and into the foam blocks. The red flag came out to clean up the mess. The decision was made to run the short track feature while the massive cleanup took place. After the wreck, the race was cut back to 25 laps from the original 35 circuits.

When action resumed, Greg Stilwell shot into the lead from the outside lane. Greg, looking for his first-ever win, was impressive out front, while O’Leary dropped back a car length or 2. With 5 laps to go, Tommy closed the gap and tried to dip low under Greg, but to no avail. With 2 laps to go, O’Leary went to the outside lane and edged up slightly on the leader. At the white flag, Tommy (at the wheel of the #111 of Adam Plonski) drew even with Stilwell going into turn 1. O’Leary pushed his machine hard through the final turn and just edged out Greg in the great finish, Tommy’s second win of the season. Stilwell’s great run ended in second, McCloskey, just a couple car lengths back of the lead pair, was third, Robert Meiring fourth and Kelley Jr. fifth. Brian Moore, Young, Hedges, Andy Harding and Jimmy Wahl completed the finishing order. Ron Allen encountered mechanical issues and did not start. Hedges set a new track record in time trials with a lap of 16:783. Stilwell and Kelley took the heat wins.

Matt Ringger made it 2 for 2 as he edged into the lead with 5 laps to go to win the 20 lap The Vault Antiques and Treasures ARCA Factory Stock feature race. Steven Smith took the lead at the start and battled with Matt for nearly 10 laps as the duo ran door to door. Ringger finally grabbed the top spot on lap 15 on his way to the victory. Smith was second, Jesse Carrillo third, James Rae fourth and Craig Osenbaugh fifth, followed by Randy Padgett Jr., Ian Jezylo, Adrian Sharp, Mike Miller, Jeff Wells and Ryan Mallory. Osenbaugh was the fast qualifier at 11:718. Mike Miller and Ringger took the heat wins. Miller’s win was his first-ever checkered flag. 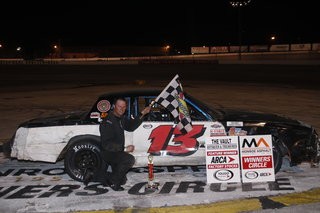 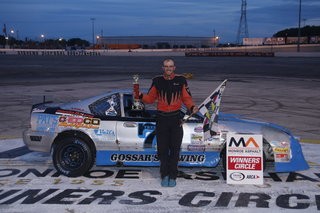 Chad Scheuer topped Ryan Clair in a best of 5 match to win the Street Drag contest. 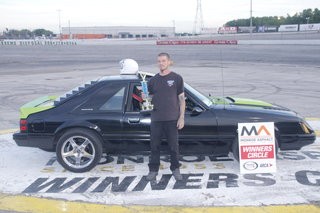 The next race at Toledo is a makeup date from an early April rained-out event. The Ross Mortgage 200 presented by PNC Bank, has a Sunday afternoon, June 30 date at 3 p.m. The race was washed out back on April 20.

The ARCA/CRA Super Series presented by Jeg’s stock-bodied Late Models and the ARCA Gold Cup outlaw-bodied Late Models will both compete in 100 lap contests. The pit gates will open at 10 a.m., practice begins at Noon, time trials are set for 2 and racing begins at 3 p.m. for the Sunday afternoon event.

Tickets purchased for April 20 will be honored for the June 30 event.

Advance tickets for the Ross Mortgage 200 presented by PNC Bank are on sale, saving fans $5 per ticket. The advance sale ends Friday night, June 28 at 5 p.m.   Phone orders will be taken by calling 419-727-1100. Tickets are also on sale at the track office for walk-ins. The order form may also be downloaded from the track’s webpage and emailed to the track.