Southgate, MI—November 2, 2018:  Race teams, officials, family and friends gathered Friday evening at the Crystal Gardens Banquet Center in Southgate, MI for the annual Flat Rock and Toledo Speedways Awards Banquet.  Each of the champions received their championship jackets and banners from ARCA President and Flat Rock/Toledo owner and promoter Ron Drager.  Over $30,000 in cash and contingency awards were distributed at the annual event. 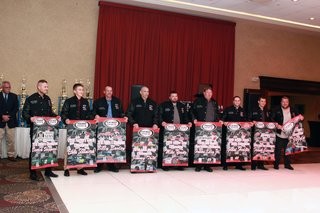 Second-generation driver Greg Studt was presented an ARCA ring, signifying his 10 ARCA track championships. In 2016, Greg captured the Flat Rock Street Stock title, and in doing so, became the first driver ever in track history to win a championship in each of the track’s 3 weekly classes-Late Model, Figure 8 and Street Stock.  In addition to those titles, Greg has also captured Late Model, Figure 8 and X Car championships at Toledo.

Adam Jezylo captured the 2017 DTS Drive Train Specialists ARCA Street Stock B Main title, and this year, it was his father, Ian at the top of the pack. The championship was Ian’s first-ever in his racing career. LJ Farmer, Rich Abel, Anthony Camilli, James Pankow, Jerry Farmer, Gary Navarre, Vaughn Chambless, Dillon Zalenski and Wilburn Parks.trailed the champ in the final point standings. LJ Farmer captured the B Main Rookie of the Year honor.

The ARCA Late Model Gold Cup Series title went to Frank Jiovani, notching his second Gold Cup championship in a row. Frank also captured his first victory at Toledo in the process.  The series is made up of races at both Flat Rock and Toledo.  Brian Bergakker, Justin Schroeder, Jimmy Thiel, Chris Benson, Steve Needles, Craig Everage, Paul Pelletier, Dennis Strickland and Albert Francis were next in line for the top 10.

The ARCA Aramark Uniform Services Late Model Sportsman division crowned Howard Kelley Jr. as the champ, his third title in the class and second in a row. Tommy O’Leary IV came home second, just 25 points behind the champ.  Greg Stilwell and Landon Schuster tied for third, with fifth to Jim Froling.  Andy Harding, Kent McCloskey, Robert Meiring, Dan Grigsby and Craig Osenbaugh (tie for 9th) trailed in the final standings.  Meiring was named the Rookie of the Year.  Greg Oberle of Aramark presented the checks and trophies to the drivers.

Mike Young was the champ in the 3-race Silver Cup Series for the Late Model Sportsman, sponsored by

R & M Recycling. Mike edged out Froling by just 5 points for the title.  Mike called his father, car owner Paul Young, to the stage and presented him with a Silver Cup.  O’Leary IV, Kelley Jr., and McCloskey completed the top 5.

The winter office for both tracks may be contacted by calling 419-727-1100. The 2019 schedules will be released around the holiday season.  Always check the official websites at www.flatrockspeedway.com, www.toledospeedway.com or www.arcaracing.com.