Toledo, Ohio-September 15, 2018: Tyler Roahrig and Tyler Ankrum captured the wins in the 30th Anniversary of the Central Transport Glass City 200 presented by the Holiday Inn Express, Hampton Inn and Courtyard by Marriott at Toledo Speedway Saturday night. Rob Stamper of Central Transport and Michelle Richardson of Courtyard by Marriott presented the trophies in the Monroe Asphalt Winners Circle. Perhaps the best night of weather of the season graced the area for the final event of the year at the Glass City oval.

The 10 car inversion for the 23 car field put Phil Bozell and Brian Bergakker on the front row for the Outlaw Late Model 100 lap contest. Brian charged into the lead on the green flag and took off. The first yellow came out on lap 12 when Tyler Roahrig spun in turn 4. Tyler ducked down pit road for adjustments and rejoined the field at the tail. Bergakker, still in command, now had the company of Cayden Lapcevich in the #16. Cayden slid by Brian and took the lead on lap 17. The red flag came out on lap 22 when Phil Bozell tagged the turn 3 foam blocks and coated the track with oil, stopping the race for about 20 minutes while the mess was cleaned up. Steve Needles, looking for his first Glass City win, was the man on the move. Steve motored into the top spot just after the restart and was the leader at lap 25. Needles ran strong out front and built up a sizable lead. At the half way mark, the top ten were Needles, Lapcevich, Tyler Roahrig, JR Roahrig, Bergakker, Harold Fair Jr., Mike Root, Frank Jiovani, Jack Varney and Jay Sommers.

A quick yellow on lap 50 for a stalled Nick Grodi erased Needles advantage, and also saw JR Roahrig dive down pit road for work. The green came back out and now Tyler Roahrig was on the fly, trying to track down Needles. Tyler moved into second on lap 54 and set his sights on the leader. Needles night once again ended in frustration in the Glass City event as he coasted to pit road with no power on lap 70.

Tyler was now in command and zipped away as he sailed to the win and the $5000 payday. Brian Bergakker stole second from Canadian Cayden Lapcevich with 2 laps to go to take second, Cayden was third, JR Roahrig was fourth and Mike Root was fifth. Frank Jiovani was sixth, the final car on the lead lap. Harold FaIr Jr., Jack Varney, Albert Francis and Nick Bailey rounded out the top 10, all down 1 lap. Tyler also picked up the LV Alliance $500 Fast Qualifier bonus with a lap of 14:808.

The second 100 lap contest for the ARCA/CRA Super Series powered by Jeg’s Late Models began with Wisconsin native Dennis Prunty taking the number 1 spot. Prunty held the point for 20 circuits until California teenager Tyler Ankrum pushed by in his #58 to take the lead. That was short-lived, however as fast qualifier Brian Campbell (15:270) moved quickly to the front of the pack, took the lead on lap 29 and built up a straight-away lead on the rest of the 18 car field. It appeared that Brian was headed to yet another win, but misfortune struck on lap 74 when the engine gave up in the #47, ending his night.

Ankrum, who had worked hard to stay within striking distance of Campbell, took the lead on lap 75 and withstood several re-starts in the final 25 laps to grab his first victory in ARCA/CRA competition and the $5000 top prize. Kyle Crump made a late race charge to take second, Michael Simko came from 12th spot to grab third, Jordan Pruitt started 13th and finished fourth, while Josh Brock stayed in the top part of the running order for much of the race and came home fifth. Prunty, Hunter Jack, Austin Kunert, Jon Beach and Mike Mazzagatti rounded out the top 10 finishers, all on the lead lap. Hayden Sprague was 11th, also completing 100 laps. 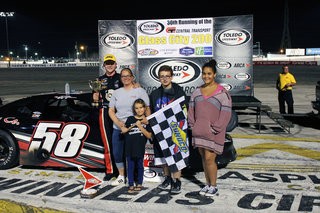 The 200 wraps up the season at Toledo, with plans in the works for the 2019 season already underway. Keep up with all the information at www.toledospeedway.com.