WHO’S NEXT TO GRAB THE GLASS CITY GLORY??

WHO’S NEXT TO GRAB THE GLASS CITY GLORY??

Toledo, Ohio: The prep work is about done, the cars are being loaded and it’s time to hit the road to head towards Toledo, OH for the 30th Anniversary of the Central Transport Glass City 200 presented by the Holiday Inn Express, Hampton Inn and Courtyard by Marriott at Toledo Speedway this Saturday night. (Joy Fair, 1968 Glass City 200 winner in the #1)

The total purse for the event exceeds $60,000. The outlaw-bodied Late Models and the ARCA/CRA Super Series powered by Jeg’s stock-bodied Late Models will each battle in 100 lap main events on the fast ½ mile paved oval. Each race pays $5000 to the winner, with plenty of bonus awards posted for each type of Late Model. 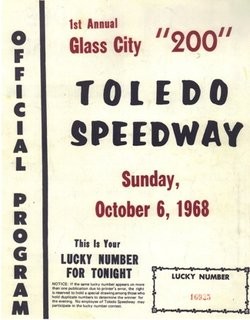 The history of this race is steeped in tradition, drivers that have tackled one of the fastest paved ½ mile ovals in the country looking for that elusive victory at the Glass City oval. ARCA founder John Marcum’s idea to run a 200 lap race to end the race season became real in 1968. From the legendary Joy Fair, who won the very first Glass City 200 in 1968, to last year’s winners JR Roahrig and Johnny VanDoorn (in the new format of 100 laps for each type of Late Model), the roster of drivers is a list of who’s who in short track racing over the 29 years of action for this race.

Bob Senneker, Joe Ruttman, Danny Byrd, John Anderson, Jim Bickerstaff, Marvin Smith, Moose Myers, Earl Ross, Jr. Hanley, Augie Grill, Jody Ridley, Dick Trickle, Neal Sceva, Steve Sauve, Dave Kuhlman and so many more have been a part of this prestigious event over the years. The race was contested from 1968-1977, but was halted when the track was sold. Marcum’s grandson, Ron Drager, the President of ARCA and his business partner Roy Mott, purchased Toledo in 1999 and the event was immediately re-instated. Michigan hot shoe Tim Felver topped a stellar field in the re-birth of one of the classic short track races in the nation.

The entry list for both classes of Late Models includes previous winners and a bunch of drivers that are ready to add their name to the list of Glass City winners.

The updated pre-entry lists for both groups are located in the next race box on the Toledo Speedway home page.