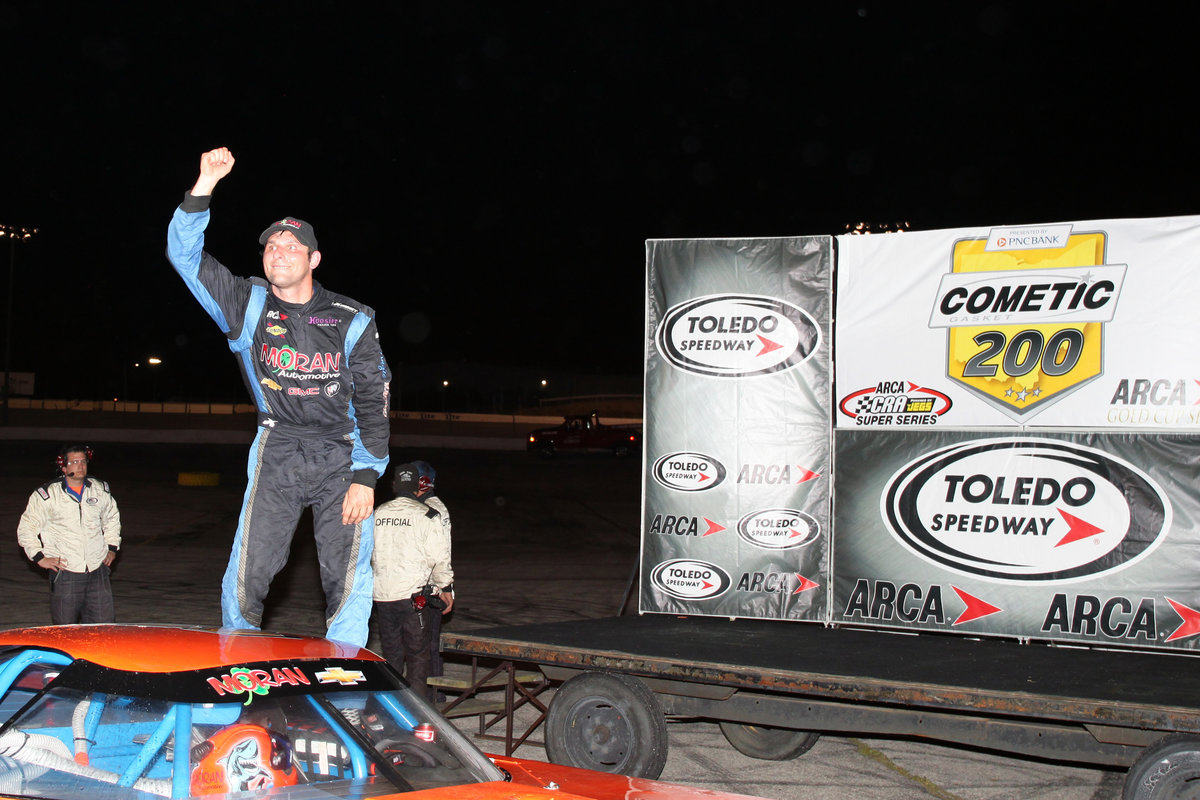 The very warm night was accompanied by a nice breeze, which provided some relief for the fans and race teams. The ARCA/CRA Super Series Late Models powered by Jeg’s 100 lap contest was the first race of the night. Tyler Ankrum and Kyle Crump took turns leading the early stages as Campbell, the fast qualifier (15:360) began his move from his 6th starting spot. Brian took the lead on lap 30 and ran strong out front. Early challenger Harold Fair Jr. dropped out while in the third spot. A late yellow on lap 88 for a spin by Carson Hocevar bunched the field, but Campbell pulled away on the restart as he sailed to victory. Ankrum was second, Johnny VanDoorn was third, Crump was fourth and Hocevar got back to fifth. Cayden Lapcevich, Hunter Jack, Logan Runyon, Dennis Prunty and Jon Beach completed the top ten. The top 8 cars were all on the lead lap. 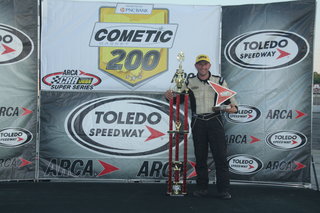 Frank Jiovani scored his first career Toledo win with the victory in the Miller Lite 100 for the ARCA Gold Cup/Main Event Series Late Model feature. Albert Francis jumped into the lead on the green flag and held the point for 14 laps until Brian Bergakker (at the wheel of Bryan Clay’s #30) took the lead. Brian had company as Steve Needles and Jiovani also got by Francis. Terry Senneker, the VanDoorn Racing Development Fast Qualifier (15:030), retired with overheating issues on lap 19. Needles ducked low coming out of turn 2 and took control of the number 1 spot on lap 20. For the next 26 laps, Needles, Bergakker and Jiovani pulled away from the field and diced back and forth. At lap 46, Bergakker took his machine down pit road, done for the night. 6 laps later, the yellow flew again as now Needles slowed as his car’s engine quit, which now gave the lead to Jiovani. Frank was 2nd quick in time trials and showed his strength as he pulled out to a solid lead on his way to the big win. Mike Root came home second, Ron Allen, subbing for Joe Hawes in the #53, was third, Francis was fourth and Dennis Rederstorf fifth, followed by Greg Forcht, Needles, Bergakker, Chris Benson and Nick Grodi. Dennis Strickland, Brian Maxim, Senneker, Nick Bailey, Tommy O’Leary IV and Emerson Huffman completed the running order. The heat took its toll on both cars and drivers in all classes Friday night. 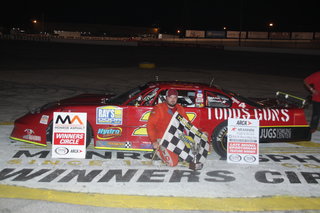 Dennis Whisman Jr. held back Jeremy Vanderhoof and his father, Dennis Sr., to win the 20 lap ARCA Victory Lane Quick Oil Change 20 lap Figure 8 contest. The young Whisman showed poise as Vanderhoof was glued to the bumper of the leader the entire distance. Whisman Sr. closed the gap on the lead duo in the final 5 laps as the lead trio finished in that order. David Katafiaz, Scott Apperson, Travis Earley and Dave Lambert were next in line at the finish. 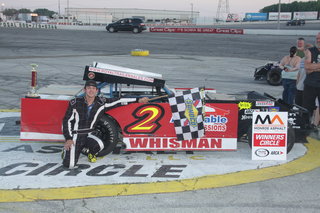 The Monroe Superstore/Great Clips Night of Destruction is next up on Toledo’s schedule, the third attempt to complete this program this season. The date is Friday evening, July 6.

The race at Toledo is all general admission seating on a first-come, first-serve basis. Tickets can still be purchased in advance by calling the track at 419-727-1100. The advance sale for the July 6 Toledo race ends Thursday, July 5 at 5 p.m. Tickets are not available on-line. Adult tickets are $16, children 6-12 are $3 and under 6 are free.

The souvenir programs and 50/50 tickets sold June 1 will be included in drawings held July 6. Additional programs and tickets will be available that night.

In addition to the School Bus Figure 8 race, a full race card of events will keep fans entertained July 6. The Boat Figure 8 race, Train Figure 8 and a Flag Pole Race are on the race card. Stock Car racing is also part of the evening, as the ARCA Victory Lane Quick Oil Change Figure 8’s and the ARCA Factory Stocks will trade paint. As an added treat, the ARCA Aramark Late Model Sportsman cars will battle on the fast ½ mile paved oval in a 35 lap event, part of the R & M Recycling Silver Cup Series for the division.

Parking is free on the track grounds. The front gates will open at 5:30 p.m. when the ticket office opens. Race car practice begins at 6 and the show begins at 7:30 p.m.