Toledo, Ohio—September 17, 2016: (Complete story): Tyler Roahrig out-ran his father JR and sailed to the victory in the 28th Running of the Great Lakes Helicopter/Central Transport Glass City 200 presented by Holiday Inn Express and Hampton Inn Saturday night at Toledo Speedway. The event was completed after a day-long rain, which pushed the start time back nearly 3 hours. The skies cleared and a beautiful night greeted a dedicated group of fans and teams.

The start of the race was filled with yellow flags and then laps 20 to the lap 101 break ran straight through. Terry Senneker jumped into the lead on the start, but his night was short as he went down pit road with engine woes on lap 8. Tyler Roahrig assumed the lead and ran strong out front while his father JR tried to chase him down in the early stages. The red flag appeared on lap 20 when RJ White’s car went up in a ball of flames and smoke going down the back-chute as oil covered the surface. Harold Fair Jr. and Frank Jiovani got crossed up, causing heavy body damage to Jiovani’s car. Fair pitted and returned before the race restarted.

The next 81 laps ran all green flag, stretching out the field. JR Roahrig took advantage of lapped traffic on lap 56 to briefly take the top spot, but Tyler stormed back by the next lap. Hantz grabbed third spot on lap 60 and closed slightly in on the lead duo. Fair Jr. was on a mission as he came from the back of the pack and up to fourth as the half-way break neared. At the lap 101 break, the top 5 were Tyler, JR, Hantz, Fair Jr. and Dakota Carlson.

It took 4 shots to re-start the second portion of the contest. As the field came to green, Joe Hawes and Jimmie Ward tangled. The field was again lined up and this time, Chad Finley got sideways coming out of turn 2, stacking up the field. Order was restored again and on try number 3, Ward got into Hawes coming out of 2, pushing both cars into the wall, bringing out the red flag.

The 4th try was a keeper and the final 99 laps ran without a yellow. Tyler showed his strength that he has displayed all season long around the tri-state area, as he pushed the #24 flawlessly around the ½ mile paved oval. JR did reel his son back in and closed up the gap with 10 laps to go, but Tyler stood on the throttle and sailed to the victory. 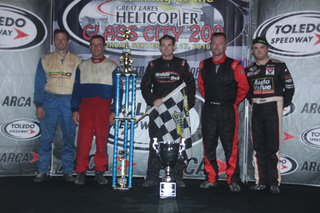 Tyler will also take home a $250 product certificate from Penske Shocks for his victory, in addition fo the $6500 top prize. Scott Hantz won the Passtime/LV Alliance $500 Fast time Award from Larry Varney with a lap of 15:012. Tom O’Leary IV picked up the $250 Burge Wrecking Hard Charger Award (Most Improved positions).

The complete race results can be found on the Toledo Speedway home page in the last race box.