(Toledo, Ohio—June 5, 2015): A marathon night of racing took place.Friday evening at Toledo Speedway for the Glass Bowl Lanes Checkered Flag Night. The first 500 kids through the front gate received a free checkered flag upon arrival to the track. Jim Froling, Jeremy Vanderhoof, Robb Remick and Elliot Pritchett were the feature winners and visited the 7-Up Winner’s Circle.

The 35 lap ARCA Aramark Late Model Sportsman feature was smooth for 21 laps as Ron Allen and Mike Young battled for the lead. Young tapped Allen and sent him down the back chute backwards, with Ron ending up in the foam blocks in the infield. He was able to restart, with Jim Froling now in charge. Froling got passed by Young, who came back up to take the lead, but on the white flag lap, Allen slowed and Young also slowed entering turn 3, giving Froling the chance to motor by on the outside lane and nip Young for the win at the wire. Young was second, Kevin Stahl Jr. ran a great race in his first outing of the year to take third, Greg Stilwell was fourth and Norm Lewallen fifth, followed by Tom O’Leary IV, Chad Stilwell, Kenny McKay Jr., Andy Harding and Allen. O’Leary IV and Chad Stilwell took the heat wins. A scary incident in the first heat saw Jim Brazeau get into the outside wall in the back-stretch. Jim was alert and talking to the safety crews and was taken to the hospital for a check-up. Young set fast time at 17:311. 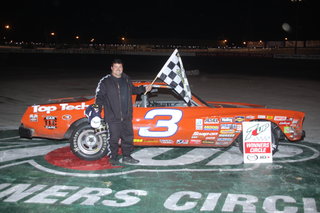 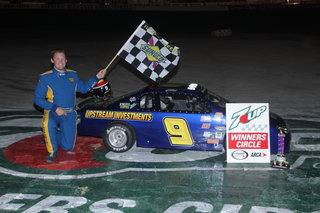 The Great Lakes Mini Cup Cars made a visit to Toledo and 21 cars were on hand. Elliot Prichett held off his brother Jarod for the win in the 30 lap feature race. Matt Kemp was third, Chad Weber fourth and Armani Williams fifth, followed by Darren Bohne, Stefanie Hile, Zack Nichols, Mary Prucnell and Andrea Miller. Doug Higbie took a wild ride and flipped down the front chute, but was able to get out of his machine. Bob Hile and Jarod Pritchett took heat race wins.

Next up at Toledo Speedway is the one and only All American Coach/Hemelgarn Racing/Super Fitness “Fastest Short Track Show in the World”, starring the MSA Winged Super Modifieds and the winged Auto Value/Bumper to Bumper Super Sprints (AVBBSS) Friday, June 12. The race is leg number 2 of the Hemelgarn/Super Fitness $25,000 Triple Crown. Kody Swanson won leg number 1 May 1 in the USAC Silver Crown race, and with a win in the Winged Sprint portion June 12, Swanson would then need to win the King of the Wing Race at Toledo June 26 to collect the bonus.

The speedway will stage a pre-race ticket sale for the June 12 contest.   Race fans can save $5 per ticket by purchasing their tickets prior to race day. The track will offer both reserved seating (with backrests) and general admission tickets for the advance sale. Major credit cards are accepted for phone orders and on race day. To obtain advance tickets, please call the track office at 419-727-1100 or the ticket order form may be downloaded from the track’s webpage.

The pit area will open at 2, practice begins at 4 and the front gates will also open at 4. The much-anticipated time trials hit the track at 6 and racing begins at 7:30 p.m. Log onto www.toledospeedway.com for further information and updates. Like us on Facebook at www.facebook.com/toledoflatrock or follow us on Twitter @toledospeedway.

Do you have an update on the driver that was injured last night, Jim Brazeau?