Toledo, Ohio—May 22, 2015:  Friday night’s PNC Bank-sponsored Kids and Autograph Night at Toledo Speedway saw sunshine and blue skies greet the fans and teams.  PNC also sponsored the $10,000 Tennis Ball Target Toss for the first 100 kids 12 and under through the front gate, but there was no winner.  On the track, feature wins went to Mike Young, Tommy O’Leary IV and Morgen Baird. 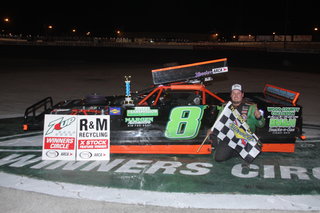 A great, great battle for the lead in the final 5 laps saw Tommy O’Leary IV lose the top spot to Greg Studt in traffic, then come right back to slide under Greg the next lap and hold on for a win in the 25 lap ARCA R & M Recycling X Car feature race.  Studt grabbed the lead from AJ Padgett in the first 10 circuits until Tommy rolled by.  Studt took advantage of the lapped traffic to go back in front, but a determined O’Leary nosed back in front on the way to victory.  Studt, Padgett, Kyle Worley and Dennis Whisman rounded out the top five.  Matt Ringger, Dennis Helsel, Dennis Whisman Jr., Dusty Brunt and Craig Osenbaugh completed the top ten.  Worley and Osenbaugh were the heat race winners.  Studt’s fast time was a lap of 11:506. 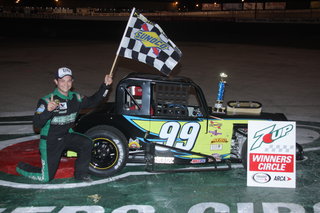 It’s the “Night of Destruction” Friday, May 29 at Toledo Speedway!  The evening will be highlighted by the School Bus Figure 8 races!  There’s more action with the Train Figure 8, Boat Figure 8, the ARCA Praxair Figure 8 division, a flag pole race, race car bowling and the return of the Factory Stock/Enduro cars!

Watch Norman lewallen because he is cheating!!!!! The guy that does his motors knows how to cheat!!!! But he knows how to b******t his way out of everything he works for teamsters local 20!!!?