(Toledo, OH—September 20, 2014):  A 4-hour rain delay put a damper on the 26th running of the Great Lakes Helicopter Glass City 200 Saturday night at Toledo Speedway.  And the rain returned again during the lap 101 break, putting an end to the marathon-like event.  JR Roahrig zipped by Jeff Ganus on lap 99 to take the lead, and what ended up as the victory for the Plymouth, IN driver as the race was official with the 101 laps completed.

The day started out in sunshine and warm temperatures and needless to say ended in the rain.  An incredible field of 34 cars were on hand, with Brian Ross picking up the PASSTIME Fast Qualifier $500 bonus with his lap of 14:899.  The top 6 in the 15 lap last-chance race moved to the 200, with Nick Grodi taking the win over Trey Duebel, Billy Roberts, Josh Way, Todd Currier and Michael Simko.  Dennis Rederstorf, Brian Clay, George Rangel and Jimmy Thiel were next in line at the finish.

The 200 was filled with several hard wrecks, which slowed the action through much of the 101 lap segment.  With a 12 car inversion, Harold Fair Jr. and Brad Riethmeyer brought the field to the green flag.  Fair darted into the lead and stayed there, but the yellow flew fast and furious.  Ross brought out the red flag on lap 12 when he spun in some oil put down by Alex Rosenberry.  Brian backed it into the turn 3 foam blocks, with heavy damage.  Another yellow came out on lap 20 with a turn 4 incident with Nick Bailey and Brent Jack.  At the same time in turn 1, Jake Francis and Scott Hantz got together, ending both driver’s race for the win.  Steve Needles received damage in the incident, but did continue.

The rain really came down at lap 23 as the City of Toledo Police requested the track to clear the grandstands with severe weather in the area. The time was around 7:20 and here’s where the 4 hour delay came in.  Track officials decided to stay with the program and make an attempt to get the race in.  A great effort by the staff and officials got things going again after the long, long delay.

On the restart, Fair Jr. gave up the lead to Terry Senneker and the second-generation driver set sail.  Jeff Ganus put the pressure on Terry and looked to the low side several times to no avail.  Another red appeared on lap 41 when Chris Benson had something break on his car and he slammed the turn 3 wall.  Chris was ok.  Senneker took off again on the restart, but around the lap 68 mark, the engine began to sputter on the #37 machine. Ganus closed in quickly and grabbed the lead on lap 74 from Senneker, with Roahrig also sliding by to take second.  A lap 74 red stopped things again as Dennis Strickland lost a wheel in turn 2, collecting Johnny Belott and Trey Deubel.  Belott was able to continue, but Trey’s night was over.  Senneker ducked down pit road and joined the field for the restart, but his night came to an end when he called it quits on lap 81.

A few sprinkles began to fall around lap 85 but the race continued with enough heat in the track allowing for the race to keep moving. Roahrig was all over Ganus’ back bumper in the closing stages of the segment, and JR nosed by Ganus on lap 99 to take the number 1 spot and the lead at the lap 101 mark.  Ganus, Fair Jr., Dakota Carlson, Brad Riethmeyer, Nick Bailey, Johnny Belott and Chad Finley were next in line at the break.  Riethmeyer cut a tire down and tagged the turn 1 wall as he took the flag to end the 101 lap session.

With about 7 minutes to go in the lap 101 break, the rains came again and the track surface was lost, ending the race and called official with 101 laps complete.  Roahrig grabbed the win, Ganus was second, Fair Jr. third, Carlson fourth and Riethmeyer fifth.  Bailey, Belott, Finley, Jack and Frank Jiovani completed the top 10 finishers.

Roahrig picked up the $200 Francis Engineering Lap 100 bonus money and the $250 Penske Shocks product certificate for the win.  Riethmeyer and Roberts will collect the $100 Lane Automotive product certificates for finishing 5th and 12th.  Bailey and Jiovani scored the $100 All Star Performance certificates for their 6th and 10th place runs.  The $250 Burge Wrecking Hard Charger Award went to Billy Roberts. 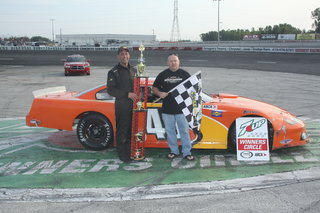 The 200 now completes the 2014 racing season for Toledo Speedway.

The world according to Slopchop:  "Stop crying and think for a minute. How exactly did you expect them to make the decision to start earlier the day of the event? The only way they would have been able to announce an earlier start time would have been social media."

The world according to the ARCA Toledo Speedway race weekend schedule posted days in advance:   SCHEDULE IS SUBJECT TO CHANGE (both copied and pasted for your reality check)...THAT is how you move the damn late models up and give bill B. and the rest of the paying customers their hard earned moneys worth...even if you believe ARCA doesn't need it

Why is it that as soon as someone criticizes the way a program was conducted, someone (in this case, SlapChop) has to make several personal insults about the person criticizing the production.  While it may be difficult to change the schedule, maybe the critic doesn't always understand the constraints that may be on the track operators.  That is no cause to insult the person.  If SlapChop is associated with any track officials (as I suspect), this is improper conduct.  At any rate, personal attacks should be removed as soon as noticed by ARCA.  As far as the sound of the PA System, it is loud, probably to be heard over the roar of the engines.  I suggest for the people who want announcer commentary during GREEN flag racing, the track should use a radio channel dedicated to that, and only use the PA System at a reduced volume during breaks or yellow flag periods.

By the way, waiting 4 hours to restart the race near midnight is unacceptable.  Hardly anyone stayed (or reasonably should have been expected to) to see the 101 lap race.  While SlapChop thinks the track doesn't need Bill's money; it surely can't risk offending the hundreds that came to see the Glass City 200 but only saw the Glass City 25.  I've been to other midwest tracks (like Berlin) that have bigger crowds and are more spectator and family friendly.  Maybe Saturday's fiasco is a reason why.

Poor decision ! Should have run the late models first . They would have at least the first 100 in. makes my 4hr trip for 22 lap a total lost.

No question the Late Models should of been run first!!  Rain was coming and was still gonna rain after the 4 hour delay!!  Finish it Sunday!! Oh that's right, it would cut into their profit!!