Add to Calendar Check-in Get Directions

A scary-looking accident in the Main Event feature saw Ron Allen get over on his roof and slide down the front straight, while his car caught fire.  Allen crawled out on his own and was taken to St. Vincent Medical Center in Toledo, where he was conscious, alert and in good spirits while undergoing further evaluation.  Additional updates on Allen’s condition as they are available will be posted on www.arcaracing.com

A total of 29 Main Event outlaw-bodied machines were at the track, with 26 taking the green flag.  The original start saw Brent Jack and Tim Felver pound the wall in turn 4, bringing out the red flag.  On the next try, Harold Fair Jr., the outside pole car, apparently had something break and he caught the turn 1 wall, ending his night.  Dennis Strickland brought the field down for the green, but Jack Landis grabbed the point on lap 1.  He gave way to Parsley as he slipped under Landis heading into turn 3.  Parsley was strong out front as the field battled for position in a long green flag run.  Things were clicking along until lap 60 when Ron Allen and Jerry Artuso collided in the front straight, setting off the accident.  After a 45 minute delay to clean things up, the race resumed and again Parsley stormed away from the field.  Lee Anderson, in his first visit to Toledo, started to make his move with 30 laps to go.  In the final 10 circuits, Anderson was able to get within a couple of car lengths of Bobby but the Shepherdsville, Kentucky driver took the checkered flag ahead of Anderson, Scott Hantz, Strickland, Dave Kuhlman, Landis, Joe Bush, Gary Whipkey, Robbie Johnson and John Crumrine.   Bush set fast time at 15:006.

In the nightcap, Johnny Belott was victorious in the 100 lap CRA feature event of the evening.  The stock-bodied Late Models saw J.R. Roahrig set the early pace until Belott sailed by for the top spot.  Several yellow flags were needed as the rain put a damper on the entire evening.  Belott had Eddie VanMeter and Boris Jurkovic in tow as the lead trio were ready for a battle to the finish, but the red flag came out for rain on lap 91.  The elements came down harder and put an end to the race, giving Belott his first win on the tour.  VanMeter was second, Jurkovic third and Roahrig fourth, with Scott Hantz fifth.  Landon Cassil, Parsley, Eddie Hoffman, Chris Gabehart and Kenny Tweedy rounded out the top ten.  Gabehart set a track record for the CRA cars at Toledo with a lap of 15:590. 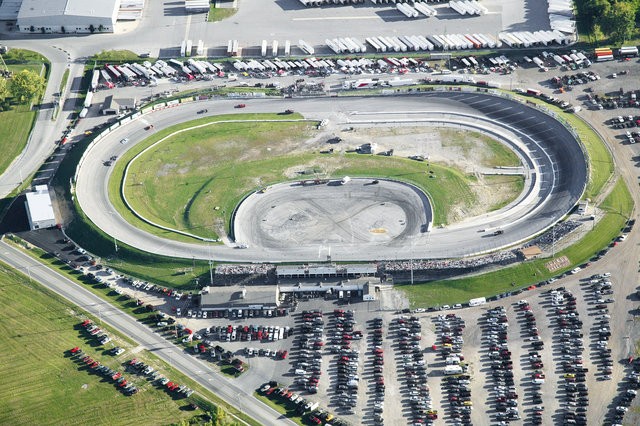