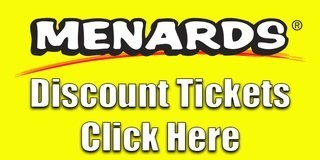 Advance discount tickets to the ARCA Menards Series season finale at Toledo Speedway are now available at northwestern Ohio and southeastern Michigan Menards locations. Tickets to the Shore Lunch 200 presented by CGS Imaging, slated for Saturday, October 8, can be purchased for just $20, a savings of $10 off the race-day ticket price.

The Shore Lunch 200 presented by CGS Imaging will determine the ARCA Menards Series champion, marking the first time since 2011 that the series title has been determined at the series’ home track.

The day’s schedule will feature practice and qualifying for the ARCA Menards Series, an on-track autograph session with each of the drivers entered in the Shore Lunch 200 presented by CGS Images, as well as several former championship-winning drivers and team owners. Toledo Speedway will also crown season champions in the Salenbien Excavating Late Model Sportsman and The Vault Antiques and Treasures Factory Stock divisions, with the 200-lap main event putting an exclamation point on the on-track activities at 4 pm ET.

“It’s a tradition for a lot of tracks to end their season with a big weekend, and the Shore Lunch 200 presented by CGS Imaging will be big for sure,” said ARCA president and Toledo Speedway owner Ron Drager. “We have a great championship battle developing in the ARCA Menards Series between three great up-and-coming talents, Nick Sanchez, Rajah Caruth, and Daniel Dye. Each of those drivers has shown to be outstanding, with a very bright future. We look forward to seeing which of them will end up as the 2022 ARCA Menards Series champion.”