Which Racetrack Does Brad Keselowski Want to Race at Again?

Which Racetrack Does Brad Keselowski Want to Race at Again? 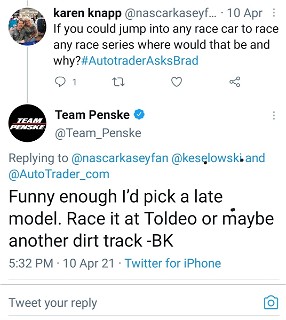 One fan asked Brad if he could jump into any car at any racing series, where would it be and why? Brad’s answer: a Late Model at Toledo Speedway. He did not answer the why part of the question, but here could be the reason why. Brad has two career track wins in Late Model competition at Toledo Speedway, including a win in the B-Main at the Glass City 200.

Brad was not the only Keselowski to have success at Toledo Speedway. His dad Bob Keselowski was the 1983 Late Model champion and has 13 career Late Model wins at the track. Bob, known as the “Black Bandit” for his sharp, black No. 29 rocket ships built by his brother Ron, also had success in an ARCA Menards Series at Toledo. He has one career win, coming in August 1990, two second place finishes, and five career General Tire Poles at the half-mile track.

Brad’s brother Brian also had success at Toledo Speedway. Brian was the track’s 2003 Late Model champion. Brian made seven career starts in ARCA Menards Series competition and earned six top-ten finishes, including a best finish of fourth in May 2006. He won the pole for the fall event that season as well, racing to a fifth-place finish.

Will Brad ever find his way back to Toledo Speedway late model competition? Time will tell, but the invitation is always open.

Advance tickets to all events at Toledo Speedway are available at the track office or by calling (419) 272-1100.