Toledo, Ohio—June 19, 2019: Toledo, OH was graced with 2 race tracks for cars in the 1950’s-Raceway Park, which was located at the site of the horse track and Ft. Miami Speedway. Both tracks are history and do not exist today.

Toledo businessman Herb Koester owned a patch of land out on the east end of town, located off Benore Road, very close to the Michigan-Ohio border. The current Alexis Road ended at Detroit Avenue at the time. The site was a tomato field for many years. Go-Kart racing was the rage out on the west coast at the time, something Koester kept an eye on.

Soon, Herb owned a go-kart franchise and built karts in the garage of his business, Monroe Asphalt. The Toledo go-kart track had an oval and road course, both dirt. Herb’s son, David, recalls standing with his Dad at the edge of Benore, collecting the fee to race karts-One dollar. “It took a long time to fill up a cigar box,” noted Dave, who today still operates the asphalt business with his sons and brother, Joe. 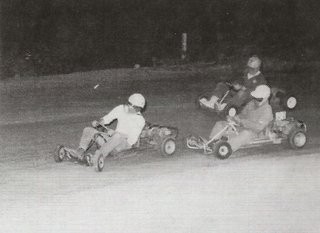 But this was just the beginning of Herb’s idea for the property. And, in 1960, Toledo Speedway became a reality. A big, high-banked ½ mile dirt track. The track’s first champion was local resident Al Beale. (cover photo in the #52).  Al also won the very first race at the track.  Al and his brother, Rollie, both raced the “circuit” of tracks in the Midwest. Rollie would go on to become a USAC champion in 1973.

Koester’s plans changed quickly. In 1961, Herb paved Toledo Speedway. The asphalt guru can be seen on the roller as the new face of the track took shape. 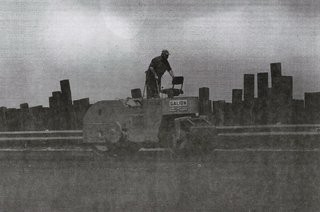 And now, it’s been 60 years of racing history at one of the fastest short tracks in the nation. We’ll continue to look at the names and faces that put Toledo Speedway on the map.

Saturday evening, August 10, Toledo Speedway will officially celebrate its 60th Anniversary, presented by Miller Lite. All the past track champions are being invited back, while a Racer’s Reunion is also in the works. $1 hot dogs, $1 popcorn and $1 soft drinks will be available.

On the track, the ARCA Late Model Gold Cup Series/Main Event Late Model Series will battle in a 100 lap feature event. The ARCA Late Model Sportsman will also see action on the ½ mile, while the ARCA Victory Lane Quick Oil Change Figure 8’s, The Vault Antiques and Treasures ARCA Factory Stocks and the Flat Rock Speedway ARCA DTS Drive Train Specialists Street Stocks will also be a part of this huge event. All classes will run features only on this special night.

More stories will follow as we prepare to celebrate the historic event at Toledo Speedway!

Great to hear about the humble beginning of the speedway! That place surely have so much stories and histories to tell.