Things turned sideways in the first set of hot laps when Zach Gibson had his top wing break, sending him into the turn 3 foam blocks. Zac was taken to a local hospital for treatment (see injury update posting at www.toledospeedway.com). In qualifying, Brian Gerster had a wheel break entering turn 4, sending him hard into the turn 4 wall. Brian walked away from the incident.

Mike McVetta set quick time for the MSA Super Modifieds with a lap of 13:278, while track record holder Aaron Pierce zipped to a lap of 12:353, just shy of his 12:220 track mark at Toledo.

The show began 15 minutes late despite the downtime for the incidents. And the first heat for the MSA cars saw a nasty accident as Rich Reid got up into the fence at the start-finish line, sending parts flying. Two spectators were injured from the debris, were transported, treated and released that evening. McKnight and Charlie Schultz won the MSA heats, while Pierce and Geoff Kaiser captured the AVBBSS heat wins.

The 50 lap Glass City Nationals for the MSA Super Mods went green and McKnight grabbed the lead. Charlie Schultz applied the pressure and ran wheel to wheel with Dave, actually taking the lead on lap 6. McKnight grabbed the lead back on the next circuit as McVetta began to close in on the lead duo. The race was stopped on lap 8 when Kyle Edwards cut down a tire going into turn 1. Tim Ice got collected in the incident, which ended the night for both drivers. The race resumed and McVetta charged up quickly on the outside lane, but on lap 18, Mike’s night was over as he slammed the turn 3-4 blocks.

The track was cleared and the next 30 laps were perhaps some of the best Super Modified racing seen at Toledo in several years. McKnight took off again with the lead. Schultz began to fade, while 2015 race winner A.J. Lesiecki began to move forward. Rookie Talon Stephens came from nowhere and was now a challenger, and Brandon Fisher’s car came alive as he joined the 4 car battle as the laps wound down. Stephens powered his way to third and was within striking distance while Lesiecki looked low to go by McKnight for the lead. As the white flag was about to come out, the lead duo tangled coming off of turn 4, sending Lesiecki sliding down the track with enough damage to end his brilliant run. McKnight was able to continue. The race was re-started with just 2 laps to go as Stephens took a shot on the high groove. McKnight was able to stay out front to take the victory over Stephens, Fisher, Jim Paller, Jon Henes, Schultz, Kevin Shirey (who tagged the turn 2 wall on the last lap), Lesiecki, McVetta, Jake Smith, Edwards, Ice and Gene Lee Gibson.

The nightcap 30 lap AVBBSS Sprint Car Main looked to be an all-green flag affair, but a late-race yellow with 4 laps to go set up a great finish. Jason Blonde powered his way into the lead on the start, but his time up front was short-lived as Ryan Gillenwater took the point on lap 5. Ryan built up a sizable lead as Pierce began his move to the front. Aaron whittled away at the leader’s advantage lap after lap, and the lap 26 yellow for Blonde, who was battling an ill-handling car, gave Pierce his shot at the win. Gillenwater ran strong out front as Pierce could not make up the difference as Ryan scored the big win, his first in a Sprinter for the Canton, MI native. Pierce was second, a late race run by Bobby Santos netted him third, Derek Snyder was fourth and Jerry Caryer fifth, followed by Tom Patterson, Blonde, Kaiser, Tom Geran and Tyler Roahrig. Local favorite Jimmy McCune, John Turnbull Jr. and Ryan Litt all encountered mechanical woes and did not start, along with Gerster. 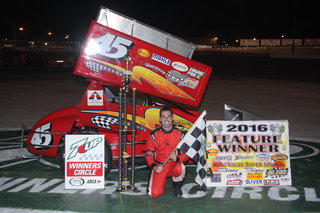 The track paid tribute to the McCune family at intermission, honoring their decades of support and dedication to the sport. “Irish” Jim McCune, the patriarch of the family, was on hand for the event. A re-furbished car of Jim’s was brought out on the front straight during the ceremony. 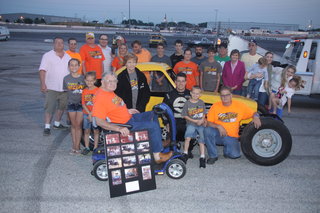