Toledo, Ohio—November 6, 2015:   Race teams, officials, family and friends gathered Friday evening at the Crystal Gardens Banquet Center in Southgate, MI for the annual Flat Rock and Toledo Speedways Awards Banquet.  Each of the champions received their championship jackets and banners from ARCA President and Flat Rock/Toledo owner and promoter Ron Drager.  Over $35,000 in cash and contingency awards were paid out at the annual event. 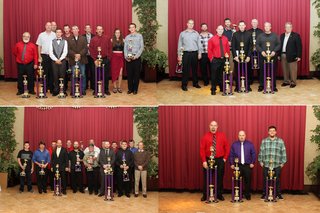 Kevin Stahl Jr. and Kevin Stahl Sr. presented Don Roberts with a chassis for winning the Stahl Fabrication Hard Charger Award, which awarded points for each position gained from starting spot to finishing spot in the Street Stock A Main events at the track.

The Monroe News Enduro Series feature a total of five-250 lap events in 2015, including the first-ever event at Toledo.  Robb Remick, who shared the 2014 title with Rick Bennett, edged out Rick by 30 points to wrap up the 2015 championship.  Dave Zewicky of the Monroe News was on hand for the trophy presentations. Jeff Braun, Jacob Thomas, Troy Brehmer, David Rumble, Matt Ringger, Derrick Sheppard, Paul Martel and Jimmy Gullett were next in line for the top 10 point men.

Jeremy Vanderhoof sailed to his 4th Praxair Figure 8 title at Toledo.  Jeremy was attending a family commitment and was not able to be at the banquet.  Dennis Whisman, Race Loving, Scott Apperson, Robbie Loving, Dennis Whisman Jr., Randy Roberts, Archie Padgett, David Katafiasz and Jeremy Miller trailed the champ.  14 year old Whisman Jr. captured the Rookie of the Year award, giving him that honor for both tracks in 2015

The winter office for both tracks may be contacted by calling Toledo at 419-727-1100.  The 2016 schedules will be released around the holiday season.  Always check the official websites at www.flatrockspeedway.com, www.toledospeedway.com or www.arcaracing.com.

Congratulations to all the champions, and thanks to everybody who comes out to support Toledo Speedway.